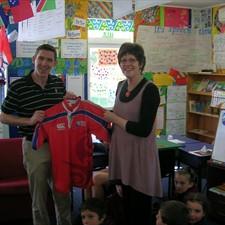 Rugby referees are more accustomed to receiving criticism than support so World Cup referee George Clancy was taken aback when a small school in Motueka sent him a postcard to welcome him to New Zealand.

While many communities around the country got into the spirit of RWC 2011 by adopting the visiting teams, the students of St Peter Chanel Primary School had decided to support the match officials.

On Thursday Clancy and fellow official Shaun Veldsman took the opportunity to travel to the school to personally thank the students for their support.

“It’s pretty unusual for the referees to get supported by anyone so I really thought we should give something back,” Clancy said.

The 34-year-old Irishman, who is officiating at his first Rugby World Cup, was amazed to discover the children had taken their supporting role very seriously.

“They had all their homework done on myself and Shaun. It’s Shaun’s birthday on Sunday and the kids all knew about that so they sang him happy birthday,” Clancy said.

“They had all their research done, from our birthdays, to the games we had refereed, to where we’d been in New Zealand – they knew it all.”

The school visit, which was capped off with an impromptu haka performance from a handful of the students, left a deep impression on Clancy.

“The whole experience has been the time of my life but I would have to say going to the school was up there as a highlight of the trip,” he said.

That is no small statement given the Irish whistle-blower was bestowed the honour of officiating the opening match of the tournament – New Zealand versus Tonga at a sold-out Eden Park.

As a parting gesture Clancy presented the school with the jersey he wore while refereeing the match between Italy and USA at Trafalgar Park on Tuesday.

And while running the touchline at the Australia versus Russia match on Saturday is potentially his last assignment at RWC 2011, Clancy has his fingers crossed he will be selected to officiate at the business end of the tournament.

“The standard of officiating at the World Cup has been top draw so it’s going to be a difficult decision for the selectors to make as to who stays and who goes,” he said.

“But I’d be hopeful that I’m not done just yet.”