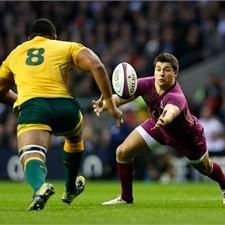 This Saturday shapes as D-Day for several sides battling to stay in contention for a top eight place in the IRB World Rankings.

With time running out until the Rugby World Cup 2015 Pool Allocation Draw tales place on 3 December it is the fight for the second seeding band that is the main focus of this weekend’s attention.

The 12 sides already qualified for England 2015 are all in action this weekend and for some it will be the final chance of this November Test programme to gain ranking points.

The importance of the next couple of weeks is clear as the IRB World Rankings on 3 December will be used to split the 12 directly qualified teams for RWC 2015 into three bands for the Pool Allocation Draw.
Although there are various permutations dependent on results on 24 November and 1 December, the world’s top four sides - at present New Zealand, South Africa, Australia and France - will form band one and be guaranteed to avoid each other in the pool stages of England 2015.

The teams ranked five to eight will form band two and the remaining four teams band three and randomly draw across the four pools for England 2015.

The next two weekends are especially important for the teams in the second band of seeding - England, Argentina, Ireland and Wales. If those on the periphery slip up, Samoa are lurking in ninth, just a whisker (0.16 rating points) behind the Welsh.

England sit on the edge of the top four but time is running out for them to make the quartet of top-ranked sides and avoid the prospect of a defending champions versus host nation scenario in the pool stages, or matches with former winners Australia or South Africa.

Even a convincing win over South Africa at Twickenham on Saturday is not guaranteed to restore England to the top four, with Stuart Lancaster's side also hoping for upsets in some of the day's other matches.
However, England do have one more shot at making the top four the following week, although that is against world champions New Zealand, the side who have occupied the number one spot in the rankings for three years now.

This weekend, the All Blacks are in Cardiff to play a Welsh side reeling from losses to Argentina and Samoa, while the Pacific Islanders who are vying for Wales’ eighth place head to Paris.

Samoa's encounter with France will be only the third meeting between the two sides with Les Bleus having won both previous.

Victories for the All Blacks and Les Bleus would leave Wales and Samoa’s positions unchanged.

However, if New Zealand and Samoa win, the Pacific Islanders could climb as high as sixth - becoming the first Tier Two nation to occupy a top eight position in the IRB World Rankings since their introduction in October 2003 - and condemn Wales to a band three position.

It is not only the matches in Cardiff and Paris which will have a bearing on this second band of seeds with Argentina's visit to the Aviva Stadium to tackle Ireland being equally important.

A loss for Ireland, in tandem with other results, could see them plummet to 10th position and leave Declan Kidney's men facing a RWC 2015 pool with two sides ranked higher than them. On the flip side, a loss for Los Pumas and they could be the ones slipping out of the top eight.

Scotland are resigned to again being in band three for a Pool Allocation Draw as even a comprehensive win against Tonga this weekend will have little bearing on their current 10th spot. The Scots were drawn with two higher ranked sides for RWC 2011 and missed out on a quarter-final spot for the first time.

Italy may currently be ranked 11th but it is theoretically possible for them to squeeze into a top eight spot, providing they can record a first ever win over the Wallabies - and by more 15 points - and other results go their way.

This weekend is the last chance for all bar four of the directly qualified teams to secure ranking points in 2012 with Australia, England, New Zealand and Wales all in action on 1 December.

The race for rankings points ahead of the Pool Allocation Draw only affects the 12 sides that directly qualified for RWC 2015 as a result of finishing in the top three in their pools in New Zealand 2011.

Nonetheless, there are still ranking points to play for outside these dozen countries with the European tours of Fiji and USA continuing with matches against Georgia and Romania respectively.

Georgia, who begin their qualifying campaign for RWC 2015 in February, would need to beat Fiji in Tbilisi in the countries’ first-ever encounter to have a chance of reclaiming their 16th spot lost after last weekend's narrow loss to Japan. However, margins of victory could be key for both Georgia and USA fro that to happen.

The IRB World Rankings update every Monday at 12:00 UK time.