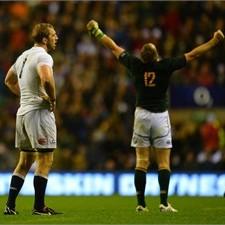 Victories for the top four sides in the world on Saturday guaranteed their band one seeding for the Rugby World Cup 2015 Pool Allocation Draw – but there is still plenty to be decided for the other direct qualified teams.

New Zealand’s place at the top of the IRB World Rankings was never under threat, while narrow wins for South Africa, Australia and France consolidated their place in the elite quartet.

With the rankings, as they stand following the update on 3 December, being used to determine how the 12 directly qualified teams are banded for the Rugby World Cup 2015 Pool Allocation Draw, the past weekend was the last chance for several teams to determine their seeding.

Teams placed one to four in the world rankings will comprise band one and will be drawn randomly across the four RWC 2015 pools, so will crucially avoid playing each other until the knockout stages.

The teams ranked five to eight will form band two and the remaining four directly qualified teams into band three. The eight places available through the qualifying process will be split into bands four and five according to strength.

With France filling the fourth spot after the southern hemisphere triumvirate of New Zealand, South Africa and Australia, fifth-placed England were left to rue a November campaign where their rating points have gone down.

A 16-15 defeat by the Springboks, with the All Blacks to come at Twickenham this weekend, mean RWC 2015 hosts England will be in the second band of teams. Who will join them, though, in anyone’s guess.
France, whose win over Australia on 10 November had previously lifted them above England into the four, put further daylight between themselves and the chasing pack with a 22-14 win over Samoa.

Samoa’s creditable performance leaves them poised to join the second seeding bracket for England 2015 at the expense of Argentina, who were the big casualties of the weekend – but all is not yet lost.

Ireland’s resounding 46-24 win over Los Pumas on Saturday secured their place in the second band of seeds for next Monday’s draw.

Among the criteria for calculating the rankings is defeat by more than 15 points and the margin of Ireland’s win leaves Argentina out of the top eight.

While Ireland rise one place to sixth, Los Pumas drop three places to ninth with Wales and Samoa rising one place. Samoa and Argentina both have a rating of 78.71 but when extended to 15 decimal places the difference between the two is less than one thousandth of a rating point.

As the rankings stand at the moment, the bands for the RWC 2015 draw would be:

With Wales to face Australia this Saturday, there could yet be a twist in the tale. The Welsh, 33-10 losers against world champions New Zealand at the Millennium Stadium, still have their own fate in their hands.
A win or a draw against Australia would see them retain their present seventh place and join England, Ireland and Samoa in the second band of seeds, with Samoa in eighth and Argentina in the third band.

However, if Australia defeat Wales, then Samoa - the first of the Pacific Island nations to occupy a top eight ranking - and Argentina will leapfrog the Welsh to consign them to the third band with Italy, Tonga and Scotland.

Given that the eight quarter-finalists at RWC 2011 were the sides in bands one and two when the Pool Allocation Draw took place in December 2008, Argentina and Wales will be eager to avoid being among the band three seeds.

Australia marginally improved their rating point by scraping a 22-19 win over Italy in Florence. The Azzurri, who came within one missed penalty attempt their best ever result against the Wallabies, climbed one place to 10th by virtue of not losing too many ranking points compared with teams around them.

Arguably the shock of the weekend was Tonga’s 21-15 victory over Scotland, a result which was followed by the resignation of coach Andy Robinson.

It was the first time Tonga had beaten the Scottish and while it has no bearing on their banding for the Pool Allocation Draw, it does see the Ikale Tahi rise one place to 11th with a much-improved rating and condemn Scotland to a two-place fall to 12th to equal their lowest ever position.

The other Test matches over the weekend saw Fiji climb one to 13th - swapping places with Canada, after a 24-19 win over Georgia in Tbilisi, and USA strengthen their position in 16th with an emphatic 34-3 win over Romania in Bucharest. The margin of defeat means Romania fall one place to 19th with Spain the beneficiaries.

- The IRB World Rankings are published every Monday at 12:00 UK time.