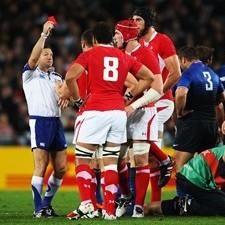 The moment Wales' hopes of a first RWC Final were dealt a massive blow as captain Sam Warburton is sent off against France CREDIT: Rugby World Cup 2015

With less than a week to go until the Rugby World Cup 2015 Pool Allocation Draw takes place in London, we continue our series of articles looking at the record of each of the 12 directly qualified teams at previous tournaments with Wales.

WALES ON THE RWC STAGE
Wales’s adventurous approach has left an indelible mark on the history of the Rugby World Cup, with the wing play of first Ieuan Evans and then Shane Williams in particular providing many moments of magic. But it was a new-found resolve in defence that almost saw Wales to their first final at Rugby World Cup 2011.

Masterminded by Shaun Edwards, Wales had a defence the envy of every other nation, conceding just five tries and 56 points in six matches up to their Bronze Final showdown with Australia.

Not even Wales, though, could cope, however manfully they tried, with the loss of inspirational captain Sam Warburton to an 18th-minute red card in what was an agonising 9-8 semi-final defeat to France.

The tone had been set in Wales’ opening pool match when they went down by a single point to defending champions South Africa. Wales flirted with disaster against Samoa before pulling through and then produced big wins against Namibia and Fiji to ease into the knockout stages.

Tries from Shane Williams, Mike Phillips and Jonathan Davies sealed a stunning quarter-final victory over Ireland that left Warren Gatland's men on the verge of glory - only for their hopes to disappear in the red mist.

Back in 1987 Wales had no problems winning tight matches, notably the third place play-off against Australia, which was won 22-21 after Paul Thorburn magnificently converted Adrian Hadley’s late try from the touchline.

Since then Wales have never managed to better their third place finish in the inaugural tournament. The Welsh Triple Crown winning team of the following year quickly broke up with the departure of many of its stars to Rugby League and the three Rugby World Cups of the 1990s were largely forgettable affairs.

Rocked by the resignation of head coach Ron Waldron on the eve of the 1991 tournament, Wales’ challenge was effectively over before it started after they fell to a humbling 16-13 defeat to Western Samoa at Cardiff.

History repeated itself in 1995 when Alan Davies, who had taken over from Waldron, left his post with RWC 1995 in South Africa only a few months away. Australian Alex Evans headed up a caretaker coaching team. Defeats against New Zealand and Ireland again eliminated Wales at the pool stage. A star was to be born, though, as Gareth ‘Alfie’ Thomas, who went on to be a Test centurion and captain of his country, made his debut.

Enter the ‘Great Redeemer’ – Graham Henry. Henry had restored confidence and raised expectations leading into RWC 1999 with a number of standout results, including wins over France in Paris and South Africa in Cardiff. As host nation, Wales started solidly enough with victories over Argentina and Japan but their 10-match winning run was halted by old foes Samoa. A 24-9 quarter-final defeat by Australia at the Millennium Stadium signalled the end of their campaign.

RWC 2003 proved something of a turning point for Wales at the Rugby World Cup, scintillating performances against New Zealand and eventual winners England proving that their exciting brand of rugby could trouble the best.

Now coached by Steve Hansen, Wales had gone into the tournament on the back of a Six Nations whitewash, and there were few signs of a revival in the pool stages with largely unconvincing wins over Canada, Tonga and Italy earning them a quarter-final against England.

With the pressure off, Wales were able to express themselves in their final pool match and they had New Zealand in some trouble, before going on to lose an epic encounter 53-37. Shane Williams’ brilliance caught England napping until their forward dominance eventually told and Wales bowed out in Brisbane.

There were shades of 1991 and 1999 in RWC 2007, when Fiji emulated Samoa and sent Wales crashing out of the tournament prematurely after a 38-34 victory in Nantes. Wales exorcised those ghosts four years later in New Zealand, a 66-0 win over Fiji being one step on a remarkable Rugby World Cup journey that captivated the nation and almost delivered historic success.

Wales’ 81-7 win over Namibia in RWC 2011 was their biggest ever World Cup victory. Centre Scott Williams scored three of his team’s 12 tries.

The Bronze age - Wales surprised the rugby world by finishing third at the expense of co-hosts Australia in the inaugural tournament of 1987. This remains their best finish to date in the history of the competition. Wales would have to wait 18 years before they would beat the Wallabies again in a senior international match. shocking the co-hosts and

Tipped out - After lighting up the tournament with some stunning play Wales were rightly considered favourites in the 2011 semi-final against a France side that had limped through to the last four. But all that changed once Wales captain Sam Warburton – an inspiration throughout the tournament – had been sent off inside the opening quarter for a ‘tip’ tackle on Vincent Clerc.

Defeat to Western Samoa – One of the biggest upsets in Rugby World Cup history, and one in which the spirit of the Rugby World Cup is encapsulated, occurred when Western Samoa beat a Welsh side in disarray at RWC 1991. With brutal tackling, strong attacking play and steely determination, the Samoans triumphed over one of the giants of the game with a 16-13 victory at the Arms Park in Cardiff.

‘Imagine if we’d played the whole of Samoa’ - An unnamed Wales fan tries to console himself with dark humour following the humbling loss to Western Samoa.

Second row Huw Richards became the first player to be sent off at a Rugby World Cup when he was dismissed for punching Gary Whetton in Wales’ 49-6 semi-final defeat to New Zealand in 1987.