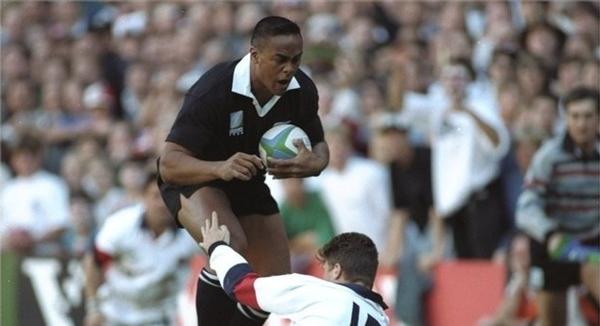 In the final part of our November retrospective series we rewind to one of the finest Rugby World Cup matches - New Zealand's victory over England in 1995. Enter Jonah Lomu.

When Mike Catt hung up his boots for good in 2010, after 76 England caps and a Rugby World Cup win seven years earlier, one Australian newspaper ran with the headline ‘Jonah Lomu’s speedbump retires’.

The utility back had felt the full force of the All Blacks’ latest superstar in one of the iconic moments at Rugby World Cup 1995, but he was not alone. During the tournament the rugby world was put on notice as an international rookie – aged only 20 and with two caps to his name – redefined what was possible on the playing field.

His captain that day was one of the greatest All Blacks to wear the jersey. A veteran of New Zealand’s triumph at Rugby World Cup 1987, Sean Fitzpatrick was part of a side groomed to play quick, expansive rugby by coach Laurie Mains - although Lomu wasn’t quite part of the equation pre-tournament.

“It was amazing, really,” Fitzpatrick recalled. “In 1992, Laurie Mains had said that if we were going to compete at the World Cup in ’95, we needed to be the fittest and fastest team in the world. I don’t think, at that stage, he had any idea that Jonah Lomu would be standing on the wing.

“What a lot of people don’t realise is that he wasn’t even going to the World Cup. Laurie had him playing Sevens in Japan, with the New Zealand Sevens team. Eric Rush got injured, Jonah came into one of the teams in Hamilton for the final All Black trial and scored five tries in that game.

“He suited being the fittest and fastest team in the world. We got the ball very quickly, it was very high-tempo rugby, and managed to get it to Jonah with a lot of space. It worked perfectly. The game that it worked better than any other game was against England.”

After a brace in New Zealand’s tournament opener - a 43-19 victory over Ireland - and another try in their quarter-final win over Scotland, Lomu poured his best efforts into their semi-final showdown with an England side fresh from a long-awaited victory.

In the last eight Jack Rowell’s team had secured an emotional win over Australia, thanks to Rob Andrew’s long-range drop goal, and with it revenge for their defeat in the final of the second Rugby World Cup in 1991.

According to prop Jason Leonard, who would finish his career as a Rugby World Cup-winner and his country’s most-capped player, England failed to look past the Wallabies, and the challenge of the All Blacks slipped under the radar.

“We beat Australia in the quarter finals, so I think we viewed that very much as our final as we’d lost to them in 1991,” he said. “We really didn’t even give New Zealand a thought.”

They were quickly aware of their mistake once the game had kicked off. England weren’t the only team at the tournament with a score to settle, and Fitzpatrick recalls using his side’s 15-9 defeat at Twickenham two years earlier as ammunition when preparing for the rematch at Newlands.

“For us, that loss in ’93 was spoken about quite a bit going into that game,” he said. “A lot of the players that played in ’93 were playing in ’95 and England bore the brunt of that. We’re a funny species, we remember our losses more than our wins.”

'Taken to the cleaners'

New Zealand duly came out firing and rocked England onto the back foot in the opening half an hour. Tormentor-in-chief was Lomu, whose deadly combination of speed and power was plain to see. It took him only three minutes to crash over for his first try, a minute for each tackler he carried over the line with him.

Two minutes later openside flanker Josh Kronfeld breached England’s defence, before Zinzan Brooke stepped up to leave Leonard in no doubt that his side were in for a tough afternoon. The back row’s drop goal sailed over from just inside halfway to make the score 18-0 after 20 minutes.

“The one memory that sticks out in that game would be when Zinzan Brooke hit a drop goal from halfway, and he’s a number 8,” he recalled. “I’ll always remember turning around, and I did say: ‘If a number 8 can hit a drop goal like that, you just know it’s not going to be your day’. So it proved to be, sadly. We were taken to the cleaners.”

Lomu had three more tries in him before the game was over, including his now-infamous trampling of Catt, and scrum half Graeme Bachop another, although the second period was kinder to England as they opted to use the ball.

Captain Will Carling and prolific wing Rory Underwood both bagged doubles, but their efforts did little to paint a more respectable picture. They had been swept aside 45-29.

“I don’t think that anyone who plays against the All Blacks would ever, ever think that they were an easy touch,” Leonard said. “They’ve been one of the best teams in the world for time immemorial, because they’re rugby mad. The nation just breathes rugby. I think any player would always take the All Blacks as being the pinnacle of playing your rugby. As a rugby player you want to play the best, and you’ve got to say that over the years, the All Blacks have been the best.”

England would finish fourth after losing 19-9 to France in the Bronze Final, while the All Blacks came up against the weight of history in the decider. Lomu was shackled by the South African back row, including skipper Francois Pienaar, as the Springboks won a classic encounter 15-12 after extra time.

Nelson Mandela presented the victors with the Webb Ellis Cup in one of rugby’s enduring images, but for the All Blacks there was only the feeling of unfinished business. Fitzpatrick believes that in the years following their defeat at the hands of South Africa, his New Zealand team grew into a world-class outfit.

“It was a pretty good team,” he said. “We were the fittest and fastest, and had a bit of work to do to be the strongest. We achieved that in ’96-’97, when we had quite an outstanding team. The ’95 team wasn’t the finished product, that’s a good way to put it.”

Lomu brought his block-busting talent to the Rugby World Cup stage again in 1999, finishing as top try-scorer for the second tournament in succession, but again he could not propel the All Blacks to victory.

Suffering from a serious kidney disease, he was forced from the Test stage in 2002 and into retirement following spells with Cardiff Blues and North Harbour four years later. It’s fair to say that rugby hasn’t been the same since.