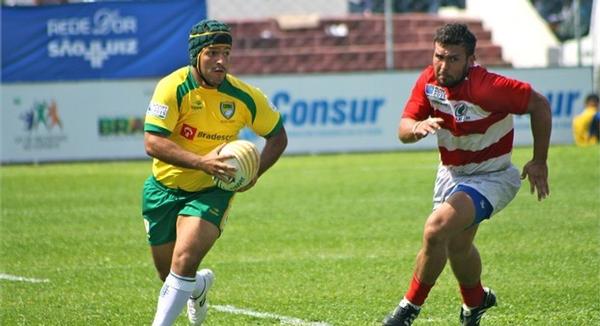 Brazil's dream of a place at RWC 2015 remains alive after they beat Paraguay in the latest stage of the Americas qualification process in October. CREDIT: Rugby World Cup 2015

RWC 2015 qualifying: The story so far

That crowd was bettered by 5,000 for their Africa Cup Division 1B final match against Namibia and they were rewarded with an incredible 57-54 win (after extra-time) that earned Madagascar promotion to Division 1A in 2013.

The winners of Division 1A in 2014 will go through to England as Africa 1, with the runner-up entering the Répechage for a chance to become the 20th and final qualifier for RWC 2015.

The pressure is now on Namibia to qualify for a fifth successive Rugby World Cup after that loss to Madagascar as they must now win back-to-back titles to go through as of right. They will be joined in Division 1B in 2013 by Botswana, who edged out RWC 1995 participants Ivory Coast to win Division 1C in September. Both sides had a ‘played two, won two’ record in the five-team competition, but Botswana took the title – and ended Ivory Coast’s dreams of a second RWC appearance – because they had a point differential just one better than their rivals.

The Philippines continue to make big strides in Asia where one direct qualification place and one Répechage spot are available.

In April they were promoted to the HSBC Asian 5 Nations Top 5 to complete a remarkable rise up the Asian rugby ranks from the depths of being in the fifth tier in 2008. Three straight bonus-point victories saw them finish above Sri Lanka, Chinese Taipei and Singapore on home soil in Manila.

Statistically, the Volcanoes are the second most successful Asian team behind Japan, having lost only once in four years (in last year’s Division I semi-final to Korea).  Japan has won all 20 of their Top 5 matches with bonus points and will again be expected to qualify as Asia 1. Don’t discount the Philippines, though, especially with the points-scoring exploits of the Saunders, Matthews and Letts brothers.

Meanwhile, Thailand are still in the qualification hunt after they overcame India 42-29 in a play-off to gain promotion to Division I next year. The Division I champions in 2013 will join the Top 5 in 2014, the winner of which will qualify for England 2015 as Asia 1 with the runner-up entering the Répechage.

The only region yet to being its qualification process for RWC 2015, Oceania will finally get underway in June when with all IRB Full Member Unions in the region will have an opportunity to compete for a direct qualification place at RWC 2015. The Oceania Cup is again the first step on the journey to England 2015 with American Samoa, Cook Islands, Niue, Papua New Guinea, Solomon Islands, Tahiti and Vanuatu expected to battle it out for the title.

The Oceania Cup champions will then take on Fiji in a one-off match in 2014 with the winner qualifying for RWC 2015 as Oceania 1. Australia, New Zealand, Samoa and Tonga have already qualified automatically for RWC 2015 after finishing in the top three of their respective pools at RWC 2011 and it would take a brave person to bet against Fiji claiming that qualification spot.

Fiji are currently ranked 13th in the world, which is some 38 places higher than their nearest rivals Papua New Guinea (51st), who are followed by the Cook Islands (55th), Solomon Islands (70th), Niue (71st), Tahiti (85th) and Vanuatu (95th). The Fijians have never lost to any of their prospective rivals, the Cook Islands running them closest when they lost 53-7 in the summer of 1997.

There will be many more twists and turns on the road to Rugby World Cup 2015, so stay tuned to the official tournament website - www.rugbyworldcup.com - for all the latests news and results.