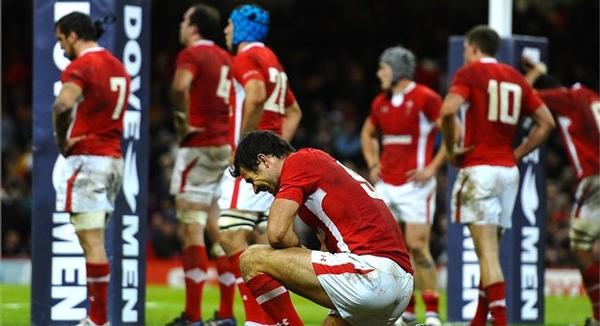 Wales have fallen into the third band of directly qualified teams for the Rugby World Cup 2015 Pool Allocation Draw after a last-gasp 14-12 loss to Australia at the Millennium Stadium on Saturday.

The Welsh went into their final Test of 2012 ranked seventh but in the knowledge that defeat against Australia would see them fall below Samoa and Argentina to ninth and facing a RWC 2015 pool with two higher ranked teams.

They were on course for that win – and to end a seven-Test losing streak against the Wallabies – with a 12-9 lead going into the final minute, but Australia fly half Kurtley Beale broke clear to score in the corner to silence the home crowd.

Nathan Sharpe, in his 116th and final Test, narrowly missed the conversion but it mattered little with the win already assured for the Wallabies, who remain third in the latest rankings, albeit now only seven hundredths behind South Africa.

Australia would have, had they won by more than 15 points, climbed above the Springboks, but the two-point margin was enough to spark celebrations in Argentina who would otherwise have been in band three by the smallest of margins.

Until Beale’s try it looked like Argentina would pay the price for losing by more than 15 points to both France – courtesy of Frédéric Michalak’s penalty two minutes from time pushing Les Bleus out to 39-22 – and Ireland earlier in the month.

The weekend’s other match was just as dramatic as the encounter between Australia and Wales in Cardiff with England ending New Zealand’s 20-Test unbeaten run in style with a 38-21 victory at Twickenham.

England were the last team to beat New Zealand in Europe – outside of Rugby World Cups – a decade ago, but the win does not improve their position of fifth as they trailed France by four points going into the match.

However, that deficit has been slashed by the win and England now trail the leading northern hemisphere team by 1.17 rating points. The hosts of RWC 2015 are joined in band two by Ireland, Samoa and Argentina.

For the eighth time since the rankings were introduced in October 2003, New Zealand will end the year as the number one side in the world despite the loss to England, although their cushion over South Africa has now shrunk to 3.14 points.

The IRB World Rankings are being used to rank the 12 directly qualified teams for RWC 2015 into three bands for the draw with the sides ranked one to four in band one - and crucially avoiding each other until the knockout stages - those five to eight in band two and the remaining four in band three.

The bands are now confirmed as: