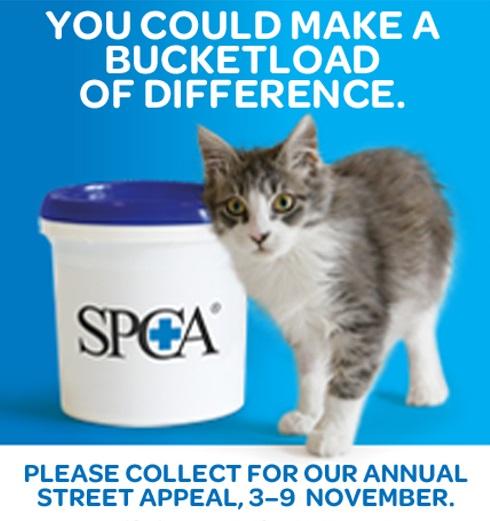 SPCA Waikato is urgently calling for members of the public to support their Annual Street Appeal to help raise much needed funds for unwanted and abused animals.

Between Monday 3 November and Sunday 9 November, SPCA Waikato volunteers will be out in full force asking for your support. Each year, the appeal raises critical funds to rescue animals such as Bailey, an adult lop eared rabbit brought to the SPCA in September after being found in an emaciated condition with severely overgrown front teeth causing him to be unable to eat or to groom himself.

Bailey received immediate treatment at the SPCA Animal Centre. His teeth needed trimming and instead of rushing to eat, poor Bailey was more interested in getting his very dirty and urine scalded fur and skin clean. He then spent time recovering at the SPCA before being sent to a loving foster home where he received the care he needed to recover. Thanks to the donations that support the SPCA's work, Bailey is now back to full health and heading to a new home where he will receive the regular dental treatment he so needs.

The SPCA is able to help Bailey and over 3,500 other animals every year thanks to the money raised in part by the Annual Appeal and the work of the volunteers. SPCA Waikato has a target of $70,000 in donations from the street appeal that will contribute towards a range of activities from education, inspectors and their adoption programme, which are just a few of the activities managed by SPCA Waikato.

Just a small donation can make a big difference to animals in the Waikato. Look out for SPCA collectors during the first week of November to help support SPCA Waikato in their mission to provide protection and care for animals.

Those in the Waikato interested in collecting during the SPCA's annual appeal week can email appeal@waikatospca.org.nz

Online donations can also be made at www.waikatospca.org.nz