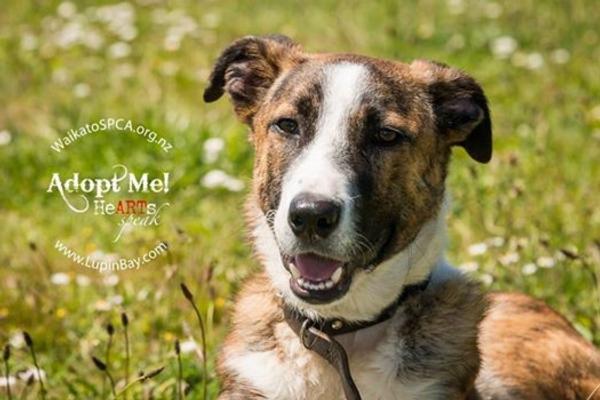 A SECOND CHANCE AT LOVE FOR SHILOH

When Shiloh first came into the care of SPCA Waikato, his hind leg was badly injured. Despite hours of surgery to try to save the limb, it was too badly damaged and had to be amputated. After recovering from his surgery, Shiloh bcame a healthy and happy dog under the care of SPCA Waikato, but he was still looking for his forever home. That's when Janet came into his life, originally as a foster carer.

On Valentine's Day, Janet knew that Shiloh belonged with her permanently and officially adopted him. "When I saw the SPCA Valentine's Day adoption promotion, I thought he's going to go, and I don't want him to go anywhere but with me."

Since moving in with Janet, Shiloh has really come out of his shell. "He used to be quite timid, but now he is exuburant, jumping around and running in circles" says Janet. "He's also created a big social life for me, I take him along on group dog walks and we meet lots of friends, I'm really enjoying it."

Janet also finds that people often approach her to ask about Shiloh because he only has three legs. "It's a novelty with him being three-legged, people will often want to talk about it" explains Janet.

Janet's positive experience of adopting an animal from the SPCA means she'd certainly encourage others to do the same. "Everyone thinks Shiloh is lovely and I am already enjoying his sunny little ways. He is so good, well socialised with other dogs and very obedient. I would totally recommend adopting an SPCA dog, they might be on the back foot at first, due to previous neglect or abandonment, but they pick up pretty quickly and blossom" says Janet.

SPCA Waikato is an incorporated society that exists to improve the lives of animals. With no government funding to assist with day-to-day running costs, it relies heavily on donationas from the public and fundraising. Each year the organisation investigates over 1,400 inspectorate cases and cares for over 3,500 animals by providing food, shelter and love while finding them a new permanent home.

The SPCA currently has a number of animals for available for adoption. To view the animals or make a donation, visit www.waikatospca.org.nz