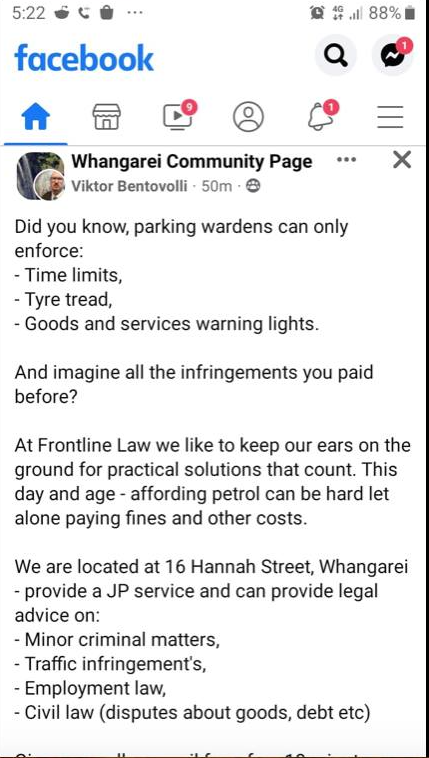 Ministry of Justice accused of not acting lawfully

The law states that parking wardens can only issue fines to people staying longer than parking time limits allow; they cannot issue fines for warrants or registrations but a Pukekohe woman is having issue with the Ministry of Justice complying with the law.

Says Debbie Swanwick Director of Ministry for Families, "we have been advocating for this woman who has taken legal advice presented by Frontline Law Whangarei that this is indeed the rule of law however when our agency spoke to the Ministry of Justice and Auckland Transport, who had initially issued the fines, both refused to cancel the fines or to allow the woman her day in court to contest the charges, also breaching her right to a fair trial. The Ministry of Justice is a party to the behaviour of Auckland Transport by enforcing fines that the law and legal counsel have confirmed are not lawful.

"Whatsmore after our conversation with the Ministry for Justice, their agent, Magdallena then issued a  seizure of property warrant to seize goods to the value of the fine, with is nothing more than an absolute abuse of power and vexatious behaviour" says Swanwick.

Ministry of Families advises clients to operate lawfully; to do no harm to person or property bearing in mind for a crime to be commited there must be a victim.

"I cannot defend the actions of a government agency not doing the same though and we most certainly will be seeking comment from Andrew Little - Minister of Justice on the matter. To be harrassing a woman over tickets issued, what appears to be fraduently, by a Pukekohe Parking warden is completely unacceptable, especially in these times where some people are having problems putting food on the table because of government policies" says Swanwick who cites her greatest concern being the discrimination at play over people who don't know the law.

"The saying ignorance of the law is no defence is one thing but for a government agency to be actively acting outside of the law shows intent to harm, and makes a mockery of the rule of law. Our agency would encourage people to be mindful that this practise appears to be commonplace, at least in Pukekohe, and to challenge such fines going forward or ask to be reimbursed if they have been at the mercy of this practise too. For $40 you can file a dispute online in the disputes tribunal to recover monies unlawfully taken" says Swanwick.

Ministry for Families would also be interested to learn if this practise is widespread or just a local issue to Pukekohe, South Auckland. "Sadly Pukekohe has a history of legal representatives not acting lawfully - it being the home of Arthur Allan Thomas" says Swanwick who can be contacted through the Ministry for Families facebook page.