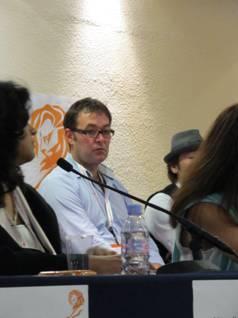 Fairfax Media is the NZ Representative of the world’s largest advertising festival – Cannes Lions International Festival of Creativity 2011 - and has sent journalist William Mace to report exclusively for them from Cannes, France. For more information, visit www.stuff.co.nz/nzcannes

Another Bronze for Colenso BBDO

LATEST: Colenso BBDO has added to its duo of Bronze Lions - picking up another in the Outdoor category to lead the Kiwi pack with three awards after six sections have been judged.

In fact they're the only New Zealand agency to pick up any awards so far in what's shaping up as a lean year for Kiwis at the Cannes International Festival of Creativity.

The Bronze Lion was awarded for the agency's three-poster campaign for Multiple Sclerosis Waikato at a typically flashy Cannes ceremony this morning [NZ time].

None of New Zealand's 13 Radio entries were shortlisted, and although the Media category held more promise with five finalist entries from four different agencies, none of them made it through the scrutiny of the final cut.

The winner of the Outdoor Grand Prix was Droga 5 New York's "Decode Jay Z with Bing" campaign, which led hip-hop lovers on a real-life and virtual treasure hunt to find pieces of Jay Z's autobiography plastered across locations on the streets of New York where the rap star grew up.

The top award for the Media section went to Cheil Worldwide for a game-changing retail idea which saw Korean subway stations converted into Tesco/Homeplus supermarkets.

People waiting for the train could save shopping time by scanning the food items which decorated the wallpaper like a virtual supermarket.

The order would be processed through a smartphone and the food delivered to the commuter's door after they reach home.

It was a "genius" idea, said New Zealand's representative on the Media jury and Starcom head Alistair Jamison, who was in Cannes for the first time in his career.

"The genius of it is that it will set a new approach - if I was an outdoor company I would be in to see every retailer in the country and saying here's an idea, how can we do this?

"It is a simple concept and we've all got smartphones, we're all time-poor - it's a really clever idea."

After his final official duty before the awards ceremony - a press conference - Jamison said that so far his experience of Cannes had been 48 hours of judging across three days "in a cold dark room while the world's been going on outside" .

Asked what he thought about the Kiwi entries in his category Jamison said it "didn't feel like there was a lot of Kiwi in the mix", although he said you get that when there were 2900 entries in the Media category alone.

"The Mini SOHO entry [from DraftFCB] in the Best Use of Integrated section was I think a fantastic campaign but it was in a very tough category.

"I think the thing that was interesting in that category was many of the entries had their product very much at the centre - like the 'Rom' chocolate bar campaign where they changed the wrapper."

Jamison was firm in his belief that more New Zealanders should make the trip to Cannes.

"I'm a born cynic but I look around here and think it's a real shame this is 30 hours away from New Zealand, because in our business it's the people who are two or three years in that would come here and just be blown away.

"It would be amazing to be able to get more young industry people here, but that's probably not going to happen."

No Radio or Cyber finalists

Kiwi agencies had 36 entries in Cyber and 20 in Design, and would have expected to improve on last year's tally of four Lions across both sections.