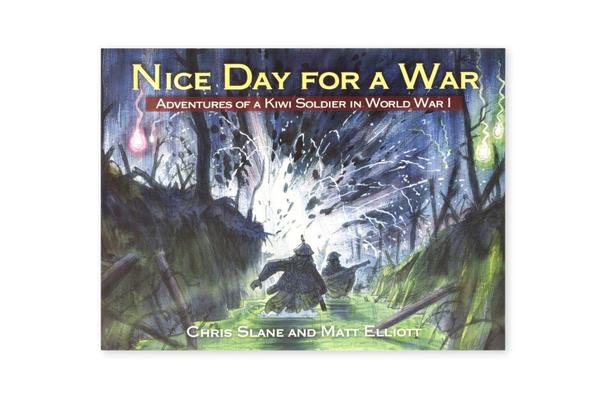 Diary of a Kiwi Soldier Wins Children's Book of the Year

Nice Day for a War, by author Matt Elliot and illustrated by Chris Slane was awarded the 2012 New Zealand Post Children’s Book of the Year at a ceremony held in Wellington tonight. The book is based on the original diaries of Elliot’s grandfather, Corporal Cyril Elliot.

“Nice Day for a War is a stand-out book which offers young readers an honest glimpse into the lives of soldiers during World War I,” says Gillian Candler, the Awards Convenor of Judges.

“The beautiful fluid line drawings and muted watercolour washes bring the diary to life. The interplay between the illustrations and text creates a powerful, emotionally engaging story for young readers.

“The judging panel are delighted to award it the New Zealand Post Children’s Book of the Year for 2012,” Gillian Candler added.

A picture book, The Cat’s Pyjamas by first time published writer and illustrator Catherine Foreman, won the coveted 2012 Children’s Choice Award. The award is heralded as a significant indicator of audience opinion. The book’s main character enchanted children throughout New Zealand with his colourful collection of pyjamas; one for everyday of the week.

“The characters in Super Finn are incredibly funny and thoroughly believable. This book touches the heart and the funny bone. The judges couldn’t ask for more,” says Gillian Candler.

The Young Adult Fiction category award went to Calling the Gods by Jack Lasenby. Calling the Gods was praised by the judges as a masterful work that transcends genre and can be read with pleasure at many levels.

“Both versions of this beautiful book have a timeless quality, with the story dealing sensitively with the sad drowning of a cousin,” Gillian Candler said.

The judging panel, which also included children’s bookseller Annemarie Florian and author and illustrator Bob Kerr were impressed how each of this year’s finalists provoke thought and said they will help young people better understand both themselves and others.

“It was a pleasure selecting the winners of the 2012 New Zealand Post Children’s Book Awards.  We read aloud, laughed, were intrigued and held in suspense. And we empathised. This year’s finalists all feature strong stories that hold the reader, skilful language and illustration, and engaging themes,” Gillian Candler added.

Honour Award
Digging Up The Past: Archaeology For The Young & Curious by David Veart (Auckland University Press)

Honour Award
The Travelling Restaurant by Barbara Else (Gecko Press)

Each Honour Award recipient received $500. Honour Awards are discretionary and are awarded in recognition of particular features in a book.