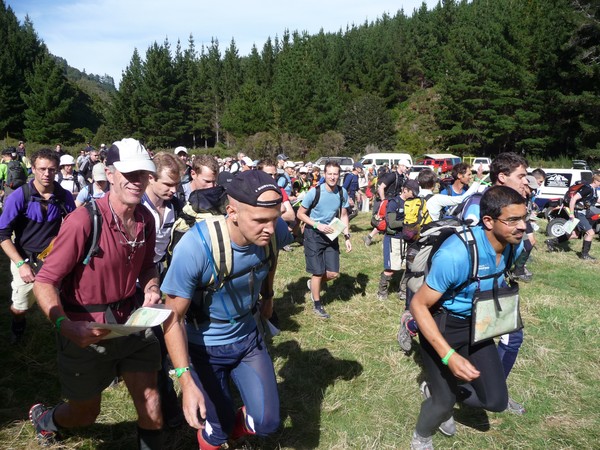 The start of 24 hours of the Silva National Rogaining Champs 2010 CREDIT: Jenny Cossey

After a sketchy start, losing time navigating along a ridgeline before catching up to some of the womens teams, the pair put their heads down and began to tick off the checkpoints with regularity.

"That was the key factor for us" said Stewart. " We stayed in touch with the map and avoided doing any long runs between contriols. We had a good night time strategy as well. "

Stewart and Hamilton covered about 70km over the 24 hours, and were pleased with the course.

"It was the best rogaine that I've ever done" commented Stewart. "And certainly the most navigationally challenging."

Julie Gordon and Debbie Mansfield were the highest scoring female team as well as the top female veteran team, while top mixed team Rachel Ockelford and Liam Drew only just managed to edge out the top mixed veteran team of Al Cross and Jill Westenra.

"We had a real good time" said Westenra, who is training for the XPD race in Australia as well as the World Rogaining Championships in Cheviot Hills later this year.

"Although we had our strategy back to front and ended up doing the hardest controls at night, zig zagging along the Whakatiki River gorge" she added.

Over 230 competitors took on the 24 hour, 12, 6 or 3 hour rogaining challenges over the weekend, with freezing temperatures as well as plentiful encounters with eels in the Whakatiki River.