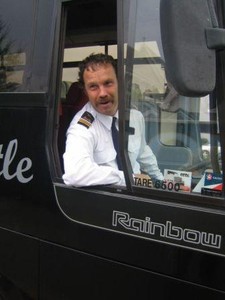 Cedric and Marlene Trounson own and operate West Coast Shuttle which operates a daily passenger transport service from Greymouth to Christchurch.


Monday, 24 May 2010
8:25AM
Preparation well underway for winter driving Preparation is well underway by transport operators and road contractors to ensure that the roads are open and safe to drive on during the comming months. 362 views


Tuesday, 16 February 2010
6:50AM
Well Done Coast to Coast event organisers I would like to congratulate the organizers, competitors and supporters for the care they have demonstrated for the entire site including roadside, camps and courteous behavior. 610 views


Friday, 25 September 2009
6:45AM
West Coast Dancing Competions Greymouth Competition Society The Committee is all organized, the cups and trophies are polished and the dancers are practicing hard at last minute dance lessons for the 95th Annual Festival of Dance to be held from 8.30 a.m. 923 views