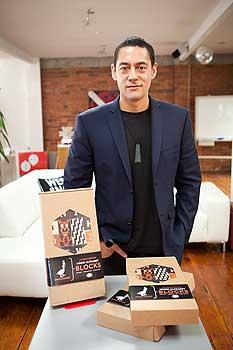 Māori alphabet blocks designed by a Massey student are bringing Te Reo and Māori culture into the homes of New Zealanders.

The printed wooden blocks include the Māori language alphabet surrounded by traditional carving patterns and figures from six iwi throughout New Zealand. The figures of Tāne, Tangaroa, Tāwhiri-mātea, Tūmatauenga, Haumia-tiketike and Rongo-mā-Tāne can be stacked on top of one another and are interchanged with tukutuku (ornamental lattice) patterns and letters.

Mr Witehira says when he showed the first prototypes of the blocks to friends, both Māori and Pākehā, they were blown away.

“One of them said they could see this being the new buzzy bee! Though that wasn’t the intention, I do see this as a way of getting Māori culture into the homes of all New Zealanders. And it’s nice to see these blocks appeal to both Māori and Pākehā.”

Massey School of Māori Studies head Professor Robert Jahnke is supervising Mr Witehira’s PhD and says the 29-year old is an extremely versatile designer who is not afraid to push the envelope.

“It [alphabet blocks] places Māori imagery and alphabet with the early childhood learning environment, allowing children of all nationalities to engage with the images of patterns like poutama (a tukutuku pattern) and the stylised human forms of the tiki from various regional styles,” he says.

Uncle Goose already produces alphabet blocks in more than 19 different languages, and its owner Peter Bultman has always wanted to design a set of Māori blocks.

“I needed a person of Māori descent, and someone with a great design sensibility,” Mr Bultman says. “Sometimes you just have a feel about a designer when you see their work, it either resonates with you or not. Johnson's previous work had all the right vibes.”