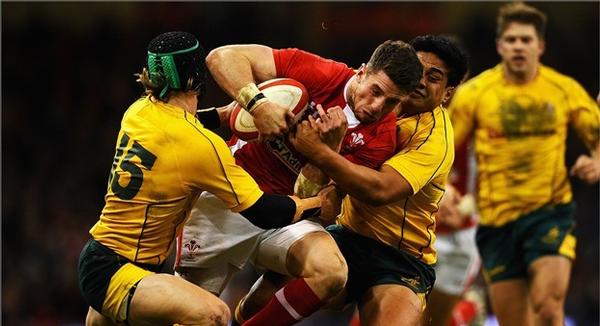 Wales were just seconds away from victory over Australia but have now lost seven matches in a row. CREDIT: Rugby World Cup 2015

Wales will be confirmed in the third band of directly qualified teams for the Rugby World Cup 2015 Pool Allocation Draw when the latest IRB World Rankings are published on Monday 3 December.

The Welsh went into their final Test of 2012 ranked seventh but in the knowledge that defeat against Australia would see them fall below Samoa and Argentina to ninth.

Wales were on course for that win with a 12-9 lead until Australia fly half Kurtley Beale broke away to score in the corner to silence the Millennium Stadium, the Wallabies winning 14-12.

Australia were already assured of a place in band one for the draw after last weekend’s narrow win over Italy, but the defeat of Wales will see them close the gap to South Africa in second.

While tears flowed in Cardiff, England were celebrating at Twickenham after ending the 20-match unbeaten run of world champions New Zealand with an impressive 38-21 victory.

England will remain fifth in the rankings but the gap to France above them will be slashed by nearly three points after the win over New Zealand, who remain the number one side.

The IRB World Rankings are being used to rank the 12 directly qualified teams for RWC 2015 into three bands for the draw with the sides ranked one to four in band one - and crucially avoiding each other until the knockout stages - those five to eight in band two and the remaining four in band three.

The bands will be confirmed as below when the rankings are published on Monday:

(Official rankings will be published at 12:00 UK time on Monday 3 December, on irb.com)