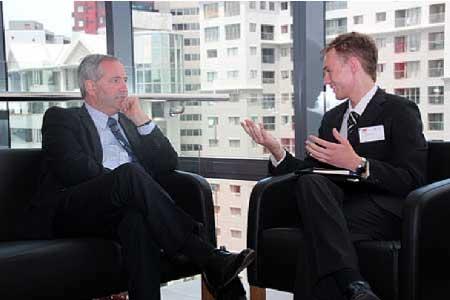 New Zealand to lead the world in sustainable energy

Future U winner Stephen Lines laid down a challenge to the invited audience at It’s Our Future – the new New Zealand Forum in Auckland today to focus on sustainable energy.

The 18-year-old Wellingtonian provided the opening address at the forum, sharing his vision of New Zealand in 2050. He proposed a world that is fundamentally similar to what we currently enjoy, with shared prosperity and people who will continue to contribute to the world economy in sustainable ways.

“New Zealand will continue to be that little old country in the corner of the world who will forever stand up for the common good and decency… and will not conform to what we do not see as a benefit to our people or environment. As a multicultural people, we will continue to thrive in social diversity and acceptance… and I believe we will see the first Maori Prime Minister.

However, Mr Lines does see a battle ahead to adjust the focus of the New Zealand economy from fossil fuels.

“We will struggle to transition from an oil-based economy, but we need to invest in renewable energy sources,” he says. “We can become producers of electricity with solar power and wind power that can be integrated into the national grid.”

Mr Lines was buoyed by comments from TUANZ chief executive and panellist Paul Brislen. He suggested New Zealand could become a primary producer of global technology exporting data from New Zealand-based data farms powered using renewable resources instead of coal and nuclear power, as is currently the case in the United States.

Vice-Chancellor Steve Maharey says today’s forum is the first of a series on the future featuring international thought leaders.

“It is the role of a university to encourage a range of opinions and how we might intelligently confront long-term global issues. We don’t intend to stop talking about the future,” he says.

The Forum is available to view online at: http://www.massey.ac.nz/massey/about-massey/events/new-nz-forum/en/watch-live.cfm