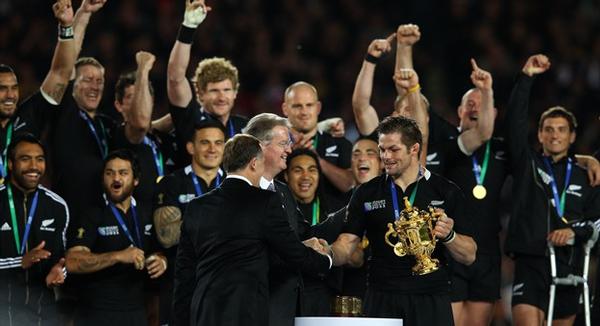 The wait is nearly over. At 14:55 the Pool Allocation Draw for Rugby World Cup 2015 will take place amidst much anticipation at an iconic art gallery on the South Bank of London and you can see it all live on rugbyworldcup.com.

Mayor of London Boris Johnson will take centre stage for what promises to be a star-studded event involving coaches and captains from the majority of the 12 teams that directly qualified for the tournament from RWC 2011.

Rugby World Cup 2015 will comprise 20 teams allocated into four pools: 12 teams that directly qualified from RWC 2011 in New Zealand and eight teams that are currently involved in the global qualifying process which kicked off in Mexico City in March.

Like the last three Rugby World Cups, there will be four pools of five teams. The eight places available through the qualifying process will be banded according to strength and known as bands four and five. These will also be drawn randomly across the pools.

The IRB World Rankings will be used to rank the 12 directly qualified teams for England 2015 into three bands for that draw with the sides ranked one to four in band one - and crucially avoiding each other until the knockout stages - those five to eight in band two and the remaining four in band three.

The bands, which will be drawn five to one in descending order, are as follows:

Johnson, who will be involved in the live draw to determine the pools the teams will be in, will also deliver a speech to give fans from around the world a taste of what to expect when England as host nation and London as a host city rolls out the welcome mat for the finest Rugby players from 20 nations and more than 400,000 fans from upwards of 120 nations.

Lapasset said: The format of seeding teams for the Rugby World Cup Pool Allocation Draw using the IRB World Rankings is a credible, succinct and proven method that reflects form, stimulates interest and is backed by our Unions.

“The Pool Allocation Draw provides a fitting climax to an action-packed year of internationals as teams, fans and media look towards England 2015 and a tournament that promises to take our pinnacle event to new levels in terms of exposure, engagement and financial returns for the global Game.”