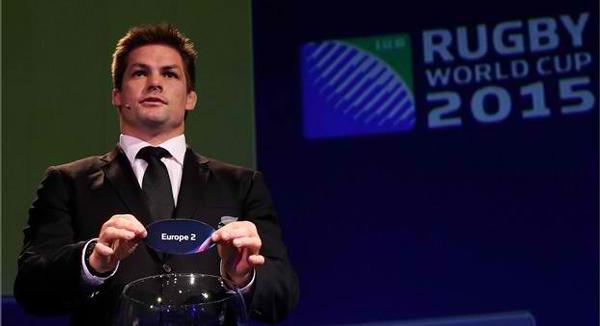 As Richie McCaw placed the Webb Ellis Cup onto its plinth, the feeling grew. This was the start of something. The New Zealand captain posed for photographs alongside the prize he helped claim last year, his pride undiminished as he and his rivals set foot on the road to Rugby World Cup 2015 with Monday’s Pool Allocation Draw.

Stepping inside from a crisp December afternoon McCaw joined a cavalcade of stars in anticipating the draw, which pencilled in the battle lines for a tournament already building nicely towards kick-off in three years’ time.

Blue-jacketed volunteers flitted here and there, guiding the assembled dignitaries and media into place. As the clock ticked towards the draw, McCaw chatted with his South African rival Jean de Villiers, while Namibia flanker Jacques Burger posed for photographs and England captain Chris Robshaw took in the room just days after victory over the All Blacks at Twickenham.

The low rumble of conversation continued as the doors were thrust open into the gallery, where Rugby World Cup-winner Will Greenwood provided a welcome not only to those in the room but also the fans watching as the draw was streamed live around the world on rugbyworldcup.com.

Anticipation coursed through the crowd as highlights of yesteryear flashed onto the walls – David Campese tore through Ireland once again, Philippe Bernat-Salles skipped clear of the All Blacks’ defence and Jonny Wilkinson slotted his famous drop goal.

The sharpest intake of breath was reserved for the moment the hosts were drawn by Jevans into Pool A alongside perennial rivals Wales, and later Australia, as well as the Oceania 1 qualifier and Répechage winner.

Once the dust had settled, though, it became clear that each pool presented a myriad of challenges. Pool B appears to be a physical one with South Africa, Samoa and Scotland to be joined by the Asia 1 and Americas 2 qualifiers.

In Pool C, New Zealand loom as defending champions, while Argentina and Tonga will both demand further growth in their respective games in the coming years. Then throw into the mix the Europe 1 and Africa 1 qualifiers. Pool D, finally, has a European flavour as France, Italy and Ireland pack down alongside the Americas 1 and Europe 2 qualifiers.

The Rugby World Cup is a tournament without easy routes. As the coaches and captains assembled post-draw to meet with the media this became more and more apparent. Alongside the calls for calm and long-term planning were bullish statements about preparing for the challenge ahead – every team will face huge obstacles on the road to the knockout stages. That’s just how rugby is these days.

Wales coach Warren Gatland could have been caught cursing his luck after landing a tough draw, but instead the New Zealander was determined to embrace the situation. Talking to each and every player produced the same response. The Rugby World Cup is a special occasion – it’s supposed to be hard to win the thing.

“I thought New Zealand would be the other one as well,” Gatland laughed. “It’s an exciting group, it’s a great group and there’ll be some good rugby. From a coach’s point of view, the best thing about a World Cup is the four or five months that you get the players together to prepare properly. You’re in pretty good shape physically, the detail you can go into in terms of preparing the side makes a massive difference. That’s what we’ve got to be excited about.”

A constant presence throughout the afternoon was McCaw, who appeared following the draw to collect yet another IRB Team of the Year Award on behalf of the All Blacks before plunging into one last media merry-go-round prior to a six-month sabbatical from the sport he has dominated for the best part of a decade.

It has been a long year not only for New Zealand and their skipper, but for most players at club and international level and McCaw’s break is vital if he is once again to dazzle on the biggest stage. Luckily for fans the world over, New Zealand coach Steve Hansen – the IRB Coach of the Year 2012 – expects to see his captain in England to defend their title, in one capacity or another.

“I’d like to think he’s going to make it,” he said. “Nothing is guaranteed. He’s the sort of person who will always put the team first. If he doesn’t feel like he can contribute, he won’t go. If he feels like he can contribute and I agree with him, then he probably will go. But there’s a lot he can offer the team without even playing.

“I might take him in another capacity if his legs don’t hold up for him. The next six months are going to be important for him. We know that he’s probably the greatest player to have played the Game from a consistency point of view and having him in the group would be a huge bonus.”

England expects the biggest and best Rugby World Cup to date. Even three years out, it was clear that players such as McCaw are determined to play a role in another global showpiece. It has been 21 years since Nick Farr-Jones’s Wallabies won the last tournament in England and while the Game has changed, the passion appears to be undimmed across the board.