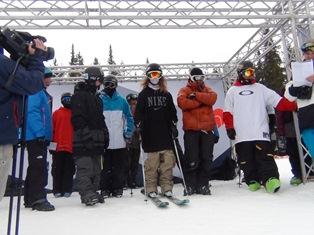 Copper Mountain, Colorado (December 9, 2012)- The first stop of the 2013 The North Face Park and Pipe Open Series (PPOS) concluded today in chilly temperatures with variable light conditions at Copper Mountain, Colorado. The New Zealand team put together some solid performances with Wanaka’s Byron Wells finishing in fifth place and younger brother Beau-James in 12th  in the men’s half pipe field and Janina Kuzma (Wanaka) placing ninth in the women’s half pipe event.

On Saturday, an international field of 62 male and 23 female athletes from countries including the United States, New Zealand, Japan, Canada, Russia and more skied in a highly competitive qualifier day. The men were divided into three heats with the top four scores in each heat moving on to the finals as well as the next top four male scores. A total of 16 men advanced to Sunday's final round. Twelve women also progressed to the finals, vying to win the first Association of Freeskiing Professionals (AFP) U.S. event of the season.

Wanaka’s Jossi Wells, Jackson Wells and Lyndon Sheehan competed in the qualifying rounds but did not progress through to the finals. This was the first time the four Wells brothers have competed against one another at an international event.

Mike Riddle of Whistler, Canada and Maddie Bowman of South Lake Tahoe, USA were the first place getters, Riddle with a high score of 90 and Bowman an 80.8.

Snow Sports NZ’s Head Park & Pipe Coach Tom Willmott said that he was pleased with the New Zealand team’s results at this early stage of the season and particularly happy to see Byron “back on track” after an injury-ridden southern hemisphere winter.

Byron scored 83.6 and his run included a switch left 10, a trick which he hasn’t used for several months, an ally-oop and the flat spin five for which he has become renowned.

For Beau-James the event marked a career best result and his first time competing in the finals at the elite level. Coach and dad Bruce Wells was pleased to see Beau-James performing so well under the pressure of competition and even including a few new additions to his run, in particular a switch left nine into a switch rodeo to finish earning him a final score of 73.6.

The second day of competition didn’t come together quite as Janina Kuzma had hoped and she was a little disappointed with her ninth place finish. Coach Tom Willmott said that although she had not skied to her full potential her performance was at a solid level.  Janina sustained a major injury in the same halfpipe 12 months ago and her coach was quick to praise her for showing confidence and a lack of hesitation in today’s finals.

The New Zealand Park and Pipe freeski and snowboard team will now focus on the Dew Tour which begins this week and promises to deliver an exciting few days of competition.

Complete results, photos and more information are located at: www.TheNorthFacePPOS.com