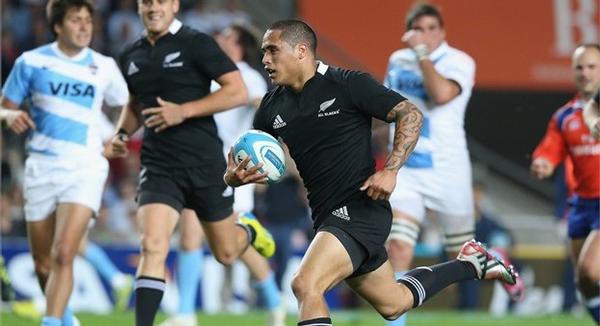 The introduction of players like Aaron Smith has given the world champions fresh impetus in 2012. CREDIT: Rugby World Cup 2015

Making it count: All Blacks' year to remember

In many ways the true mark of a champion is repeating that first, landmark success. Having lifted the Webb Ellis Cup again on home soil in 2011, New Zealand had a challenge on their hands to ensure that they continued to set the pace in international rugby over the next 12 months.

With long-time coach Sir Graham Henry stepping aside – only to re-emerge as an advisor to the All Blacks’ Rugby Championship rivals Argentina – his assistant Steve Hansen stepped into the breach with an exciting, evolving team under his command.

Following the Pool Allocation Draw for Rugby World Cup 2015 – at which New Zealand were drawn with the Pumas, Tonga and the Europe 1 and Africa 1 qualifiers – Hansen was named IRB Coach of the Year and the All Blacks the IRB Team of the Year in recognition of a whitewash of Ireland and unbeaten run to The Rugby Championship title.

The only blemishes came in the last month – a draw with Australia and shock loss to England – but Hansen believes that these setbacks will benefit his side in future.

“It’s very humbling to have the type of year we’ve had, I guess that’s why you get the rewards,” he said.

“From a personal point of view the coach award is not just about Steve Hansen, it’s about a group of players who have committed themselves to the team and a group of management who have supported and done some fantastic work.

Really, you’re collecting it on behalf of everybody.  It’s a shame that the England game was one step too far, but it will be good for us, I think, in the long run.”

Passing the baton between generations of players is a difficult procedure and, when handled incorrectly, can derail any promising side. Hansen pulled off this balancing act throughout most of 2012, as youngsters Aaron Smith, Julian Savea, Brodie Retallick, Luke Romano, Dane Coles and Tawera Kerr-Barlow all made winning contributions in their rookie Test seasons.

“It’s an issue that’s always there,” Hansen admitted. “There are great players and good players, but people come to the end of their careers. You’ve just got to get the timing right and make sure you’ve got enough, that the balance is right underneath them, so if you lose them all you’ve got some really talented and great players coming through. I think we’ve got the balance pretty good at the moment.

“It’s always difficult when you lose someone that you’ve worked with for a long time. The number one guiding principle is that the team comes first and the individual second. If it’s time to go, it’s time to go. You do it in the best way you can and make sure that everyone is respected. Form is a big thing when you get to that point and you’ve just got to talk your way through it.”

Quite aside from the added pressure of being world champions, Hansen’s team have dealt well with the expectation that comes simply from donning the black jersey. Alongside his new breed, the likes of Richie McCaw and IRB Player of the Year Dan Carter have also had superb seasons as individuals.

Conrad Smith – one half of the All Blacks’ record-breaking centre pairing – admits that there are difficulties in representing the history associated with the silver fern, but also that they can also be used as an effective motivational tool.

“It brings with it challenges, but as All Blacks we learn to pride ourselves on it and use it to motivate ourselves,” he said. “It can be quite daunting if you start getting trapped in thinking that you don’t want to be the one to lose. Especially during a game, if you’re thinking that it creates pressure and that’s not what you want.

“We try and use it as motivation and I think that’s put us in good stead in recent years. Every week is an opportunity to add to the legacy of the All Blacks. If everyone thinks that way you get away from the negative aspects of the history that’s gone before us.”

Most teams suffer dips in form and tough times, as a large number of Hansen’s squad did during the Tri Nations in 2009, but Cory Jane believes that by keeping it front and centre, they have been able to turn expectation into results regularly. The affable wing was a key part of the Rugby World Cup-winning squad and has emerged as a leading figure this season.

“We talk about it every week,” he said. “We’ve got to enhance the legacy, we’ve got to go out on that field and perform, get better as individuals and get better as a team. I think we’re working really hard at that.

“People talk about a World Cup hangover, but we’re proud to play for the All Blacks and every time we go out on the field we don’t want to have bad games.”