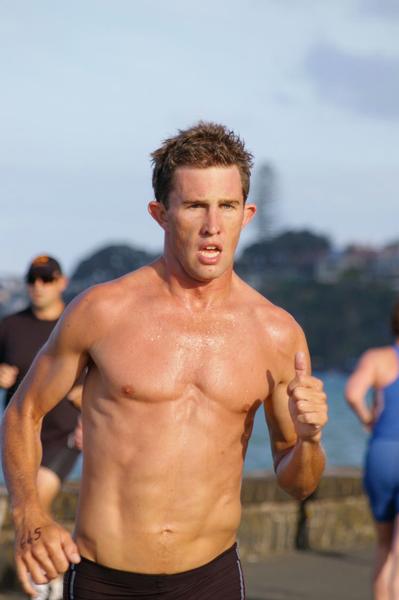 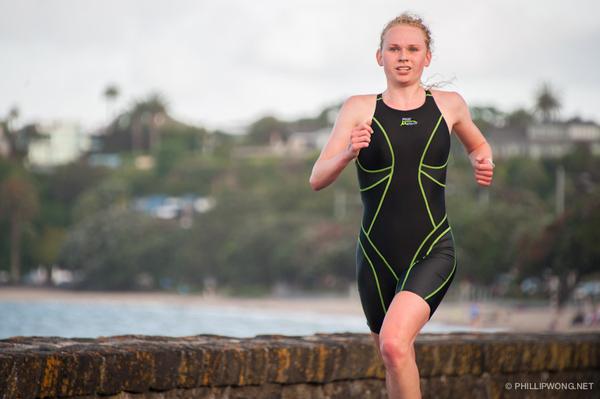 With that date the final race of 2012 was always going to be special however when Auckland laid on a stunning summer’s day it was as if Christmas had arrived early for the Stroke & Stride competitors.  The sunshine dial was set to maximum and with the balmy sea breeze blowing straight into Mission Bay it had the Waitemata Harbour at its sparkling best for Race #3 in the series.

Of course that onshore wind pumping in meant that the sea conditions were anything but flat for the big 1000 metre swim.  However it sure looked impressive from the beach as swimmers temporarily disappeared from view as they navigated up, down and around the large chop that was making life interesting for their battle around the triangular swim course.  The women’s field started first and the first 400 metre leg was probably the toughest of the day head-on into those conditions and served to split up the packs considerably.  Rounding the first buoy the top ten in the field were already spread well apart.  From there it was more downwind-like conditions but still with the need to remain constantly vigilant to not get knocked off the best heading.  It has been a few years since Kirsty Wannan last raced at Stroke & Stride and she is still a supreme swimmer.  Kirsty displayed the skill and strength required in these difficult conditions to be first out of the water in a time of 12 minutes 49 seconds.  This time was good enough for a 20 second lead over a couple of other very good swimmers in Penny Hayes and Sophie Corbidge and then close to another 30 seconds before the next chasers arrived.

The men’s field got the advantage of seeing most of this unfold and could adjust their aim for when their race started 10 minutes later.  They had exactly the same testing chop to contend with and the fastest of the men even caught a number of the first wave on the final leg back into the beach.  Revelling in these conditions was the master of the swim and serial Stroke & Stride champion Brent Foster as he clocked an impressive 11 minutes 50 seconds.  This gave him 45 seconds lead over the dangerous at any distance Ryan Sissons and a further 20 seconds back to Mark Bowstead in third and then a further 20 seconds to Jay Wallwork holding 4th place.  Again the men were spread well apart at the end of their swim as these conditions presented swimmers with plenty to concentrate on other than holding onto another’s draft.

The run out and back to the end of Kohimarama Beach was only 3 kilometres.  However the first half when everyone is having to teach their body how to run again after being tossed about in the water for the past 12 minutes or much more was pretty much head on into the persistent wind again so there were no easy rides out there.  Just ten minutes after they set out the first of the runners swung back into view as they sprinted back to the beach and the finish line.  For the third time this season Sophie Corbidge unleashes a masterly display to dominate this swimrun event and record one more Stroke & Stride victory as her perfect season continues into the New Year hiatus.  Penny Hayes returns to Auckland and snares that 2nd place for her first podium finish at Stroke & Stride.  Then it got very busy on the finish line, as Nicole van der Kaay was only 5 seconds behind in third.  Another three seconds later swim leader Kirsty Wannan was sprinting through the line a whole one second up on Jaimee Leader.

Brent Foster’s sizeable lead heading out onto the run course would probably be enough to withstand the charge of just about anyone.  However chasing him this time happens to be one of the fastest multisport runners in the world in Ryan Sissons.  These two had duelled over the shorter swim, longer run course a fortnight ago with Ryan coming out on top.  Would it be any different this time?  Ryan Sissons top end run speed proves unmatchable once again and he slides past Fozzie in the final kilometre to take back-to-back victories at Stroke & Stride.  The men’s field has been such a battleground in recent times that we have to go back ten events to find our previous repeat winner.  Brent Foster finishes runner up and Mark Bowstead scores his first ever podium at the Stroke & Stride in third.  Jay Wallwork returns to the Stroke & Stride in fabulous form, gets a superb fourth place and his best ever finish and holds out reigning Series Champion Nick Berry, which is no easy thing.

Meanwhile in the Grand Prix to decide the Series Champion after three events there is not much to discuss on the women’s side apart from Sophie Corbidge absolutely dominating in every aspect of every race to date.  Closest challengers are Samantha Warriner, Nicole van der Kaay, Elise Salt and Alana Lythe but they and the rest of the field will need to spend their break before the next event working out some sort of plan if they wish to close on Sophie in 2013.

Far more interesting in the men’s campaign for the championship with three past champions in Brent Foster, Ryan Sissons and Nick Berry all handily placed after the opening three rounds of the season.  Then mix in Sam Ward and Sam Kidd and it is far too early to make any predictions on who will top the table at season’s end.

Full age group results and points are available at swimrun.org  the next event is on Wednesday, January 23rd, 2013