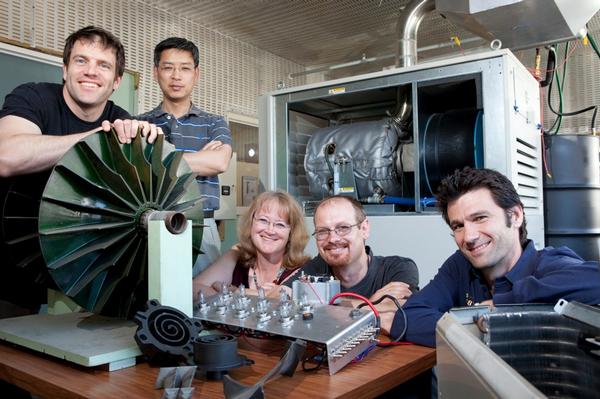 What is the largest source by far of affordable, low-carbon energy available for development?  If people think the answer is wind or solar or even hydro, University of Canterbury (UC) mechanical engineering professor Susan Krumdieck says they might be surprised.

Actually the biggest resource for power generation is coal or gas that has already been burned, Professor Krumdieck says.

``The heat that is rejected from industrial processes like making steel or petrol or cement could be used to generate about 20 times more electricity than could be developed from wind and solar combined.”

A major new green energy research project has just been funded by the Government and industry with total contributions of more than $8 million over the next four years.

UC’s advanced energy and material systems laboratory is the lead research group in the national project and has a budget of over $2 million to achieve the main objective of developing the thermal engineering capability and design tools to build thermal power plants.

The technology is well known and used for geothermal power plants around the world. However, there are only a couple of companies that currently convert heat into electricity. The mission for the UC team is to develop their own organic Rankine cycle plant design made with New Zealand-produced components and delivered by New Zealand companies.

Industry must burn coal, oil or natural gas to process every kilogram of steel, plastic, glass, paint, fertilizer or butter and to manufacture every iPad or pair of shoes, Professor Krumdieck said.

``But just like baking a cake, after you have used the heat, you normally just reject all that energy to the environment. In the case of big factories, the amount of energy dumped is more than all renewable resources combined.

``When most of the industrial plants were designed and built, fuel and electricity were much cheaper and it made sense to just dump un-used heat. The first problem for the team to solve is an efficient and cost-effective method for prospecting the unwanted energy from industry.

``Over the past two years, we have come a long way and have developed the energy prospecting tool and we have built our first power plant.

``We are investigating the possibility of using the co-generation approach for replacing UC’s coal boiler and also for new district heat and power as part of the central city re-build.’’

The project has seven postgraduate scholarships with the intention that the engineers that gain the specialist skills in prospecting, designing, building and operating these power plants will be part of a new energy engineering company that can develop green energy products and services for use within New Zealand and internationally.

Professor Krumdieck says UC’s mechanical engineering department has a new 35 kW micro gas turbine and the power plant is using the exhaust heat from that unit. The plant was built by final year students and is being upgraded over the summer.

``Now that we have the massive funding boost, we will move to a much larger unit that will hopefully be fuelled by waste wood and we will learn-by-doing. We are looking for good mechanical engineers.’’