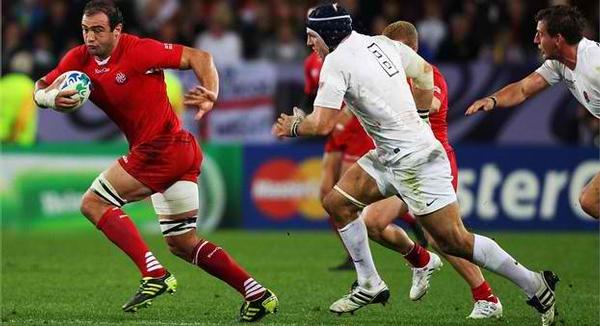 Mamuka Gorgodze will be a key figure in Georgia's quest to defend their European Nations Cup title and qualify for RWC 2015 CREDIT: Rugby World Cup 2015

The year ahead: Greenwood's 2013 predictions

With a thrilling 2012 now consigned to the history books, we can look ahead to what should be a fascinating year on the international stage in 2013. England Rugby 2015 Ambassador Will Greenwood recently donned his thinking cap to bring you his predictions for the months ahead, with some big calls to be made both north and south of the equator.

With a quick glance at the fixture list for February’s Six Nations, Ireland would be my favourites. If they win their home games – against England and France – they’ll be in a very strong position.

With the form guide as it is, it’s possible that three teams might end up winning four games. France have the trickiest run, although they were very strong in November. They must travel to Twickenham and Dublin, which just makes life that little bit harder for them. Ireland and England both have strong cases, and France must prove themselves on the road.

The British & Irish Lions can roar

I fancy the Lions to do something special in Australia. I didn’t think they would win in South Africa four years ago, and I was very nearly proved wrong in the most exciting of circumstances. Lions coach Warren Gatland has already said it: If you want to tour one of the three southern hemisphere powers with the best chance of winning, at any given moment, it’s going to be Australia.

The Rugby World Cup talk began with the Pool Allocation Draw, where the Wallabies were drawn with England and Wales, but the Lions tour is such an opportunity that all of that speculation goes out of the window.

The players and coaches commit totally to one cause and will see what’s on the horizon after that. It’s true that coaches and management think long-term but players, by and large, think only of the next game.
New Zealand must overcome big losses to improve further

New Zealand are an outstanding side, and not a very old side, but they will be missing some key figures at the start of the next campaign. They’ll miss their captain, the outstanding Richie McCaw, for the opening matches of their international season as he continues his sabbatical. They’re also a better side when Sonny Bill Williams isn’t playing rugby league, but they’ll have to wait a couple of years for him to come back.

I get the feeling that they’ll always be strong, but might be stronger with the returns of Sonny Bill and Richie. The good news for them is that Dan Carter didn’t play in the Rugby World Cup Final so the hunger will very much be there for him.

Argentina can upset one of the big guns

As the Pumas get more and more used to the pace of The Rugby Championship, and understand what’s required, they will press on and take a notable southern hemisphere scalp. Argentina have become a very credible threat to anyone, particularly at the Rugby World Cup. The way they will be able to cope with the intensity and pace of the games is simply to practice, practice, practice at that speed. If they do that, further success will come.

As the Six Nations swings into action in February, so does the top division of the European Nations Cup and with it qualifying for Rugby World Cup 2015. Expect Georgia, and their powerful forward pack, to be front and centre. I think they’re really developing a strong team. I saw their giant flanker, Mamuka Gorgodze, in action for Montpellier in a recent Heineken Cup tie and if they can find 14 blokes who look like him, they’ll do just fine!