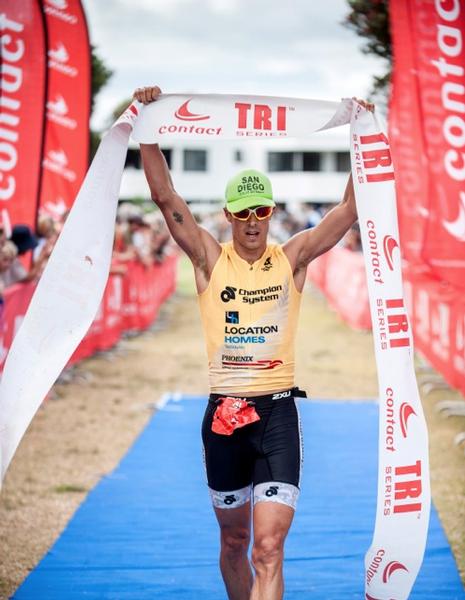 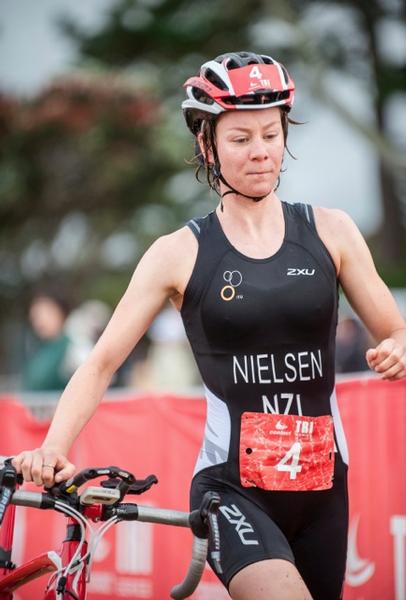 New Plymouth’s Clark Ellice ran down a plucky Mark Bowstead late in the run to win the Contact Trophy race while Waikato’s Mikayla Nielsen took out the women’s event under cloudy skies at Whangamata today, in the second event of the 7 race Contact Triathlon Series.

Early eather conditions were looking rather ominous over the popular holiday town, with dark skies and intermittent showers making for a slippery first lap on the bike leg, although the sun did make an appearance and quickly dried the 40km bike course and kept temperatures down for the 10km run.

Ellice was racing at the iconic Whangamata event for the first time and enjoyed his day’s work.

“This is such a great event, I reckon this is New Zealand’s equivalent of the famous escape from Alcatraz race, it has such history and is so tough. The swim was brutal, there were some real lulls out there in the water and then some big swells, you had to work the swells hard and time your moves but I enjoy the surf, much better I reckon than the flat water stuff in most races.

“I spent the first part of the bike trying to sort out a few issues with my bottle system but eventually I wound into my work. I left a bit of work to do on the run and to be honest at the first lap on the run when Mark still had a minute on me I wondered if I would catch him.

“But I showed the benefits of some solid training and have overcome a calf strain that I had in November and was able to run fast today, there is nothing like feeling fit and running fast in the sport of triathlon.”

Auckland’s Mark Bowstead was second, just seconds back from Ellice and pinpointed the first leg in the tough surf conditions as the difference on the day.

“I figured I needed two minutes on Clark off the bike, he is such a class runner. The bike was great though, I put out some great numbers but the swim wasn’t so good, the wading and duck diving doesn’t suit me, I think I lost too much time in the swim and that cost me ultimately.”

The win for 18 year old Nielsen was a timely boost as the athlete prepares for the Australian Youth Olympic Festival later this month; the former ITU World Elite Junior champion looked composed throughout.

“I enjoyed the swim, it was rough but I managed to do okay although I didn’t catch any waves but I got on some feet which is not normally great for me so that was good.

“The first lap on the bike was okay but I went past the turnaround point, another girl was with me but we were both told to go that way, we soon realised there was no-one around so we turned around. I got back on fast; we had a good lead out of the swim so had some time luckily.

“The run was tough, I have some nice blisters. I am also still figuring out what food to eat on race days and I had a few stomach problems but managed things okay today and stayed in front. It is great to win, back to back here is nice.”

The day saw a total of close to 600 participants across all race distances, from the hugely popular and sometimes manic kids Contact 1:2:1 to the beginners 3:9:3, and the more established sprint and standard (Trophy) distance events, including a strong turnout of teams.

The Contact Inspirational Kiwi story went to a legend in the sport with Cameron Brown racing alongside son Josh while other son Braeden took part in a sprint team with a mate and cousin. Brown is preparing for Saturday’s Port of Tauranga Half and enjoyed his day with the kids, inspiring them but thousands of others throughout his career to get fit and healthy.

“This is a fantastic event, I remember 20 years ago racing here, there are always great crowds, tough conditions, it is a good one to win. The kids enjoyed it today, they are free to do what they want to do, they push themselves we encourage them and they love it, they love their BMX racing too which is fantastic.”

The sprint races were taken out by promising young athlete Tayler Reid (men’s) and former world number one Sam Warriner (Women’s), with Warriner continuing her return to the sport with family in tow. Warriner again spoke to the many children who turned out to race in the Contact 1:2:1 and walked them through the course and presented prizes.