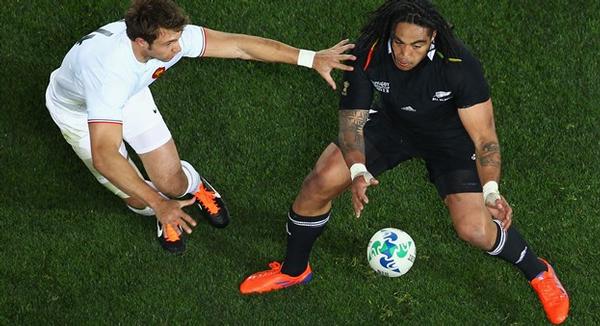 New Zealand's win over France in the RWC 2011 Final was the end of a long road to redemption following the pain of 2007. CREDIT: Rugby World Cup 2015

With the Pool Allocation Draw for Rugby World Cup 2015 in the rear-view mirror, we’ve wound back the clock to January 2009, when the All Blacks were reflecting on their lot ahead of a tough run-up to their big chance at reclaiming the Webb Ellis Cup in 2011.

The course of true love never did run smooth. In January 2009, the All Blacks had healed some of scars left by defeat to France in the quarter finals of Rugby World Cup 2007, but with every barb from their rivals, or mention of the word choke, the pain returned. The next 12 months provided further trials and tribulations, but culminated in a victory that laid the foundations for their run to the Webb Ellis Cup on home soil two years later.

In 2008, still under the stewardship of Graham Henry, who had presided over defeat to Les Bleus in Cardiff, they had taken strides as a team. In winning the Tri Nations they had their hands on silverware again, while November brought a Grand Slam sweep of the home unions, the eighth in history and the second for New Zealand under Henry.

As the year drew to a close, the Pool Allocation Draw for New Zealand’s hosting of Rugby World Cup 2011 stole into view. The All Blacks were drawn with France in Pool A and, depending on your world view, had either a long-awaited shot at revenge or potential banana skin on their hands.

They’d have plenty of time to form further opinions, as 2009 would be bookended by meetings with Marc Lièvremont’s team. The first, in Dunedin, threw together two teams with points to prove. The visitors had finished third in the Six Nations – losing to Grand Slam-winners Ireland before a heavy defeat to England at Twickenham – while an inexperienced All Blacks side trooped out at Carisbrook without Dan Carter, Conrad Smith, Sitiveni Sivivatu, Ali Williams, Rodney So’oialo and captain Richie McCaw.

The green New Zealand side came up short against a French selection bristling with rugby nous and no little skill. Maxime Médard sealed a 27-22 victory with a late intercept, but the visitors had been put in control by first-half scores from Francois Trinh-Duc and William Servat.

It had been 15 years since Jean-Luc Sadourny rounded off ‘the try from the end of the world’ to secure France’s only series win in New Zealand, but the omens were good for the tourists heading into the rematch in Wellington.

In filthy conditions, however, the All Blacks found new resolver. Cédric Heymans scored one of his best international tries, skipping along the touchline, but with a new back row in place and Smith restored to the midfield the hosts were able to scrape through 14-10. A first series loss since the mid-1990s may have been too much for such a young side, but by the skin of their teeth they wouldn’t have to face the inquisition just yet.

As the wet, weary sides left the field at Westpac Stadium, the British & Irish Lions continued their journey through South Africa. The Springboks would eventually edge a classic series 2-1 after some of the most brutal, thrilling Test matches of the modern era. Buoyed by their success, the powerful South Africans next took aim at New Zealand, Australia and the Tri Nations.

After a near-miss against France, the All Blacks endured a mixed tournament. McCaw returned to add his leadership and guile to the back row, but with Carter absent until midway through the series there was little joy to be found in the early stages. Despite whitewashing a struggling Wallabies side to retain the Bledisloe Cup, New Zealand were bullied by the Springboks and lost all three matches to the eventual champions. With Carter and McCaw firing again, though, redemption was at hand.

November tours can be a curious beast. While a gap traditionally exists between the southern hemisphere powers and their northern neighbours, modern rugby asks a lot of its practitioners and tired bones can play a part. Not on this occasion. Following a 32-18 win over Australia in Tokyo, the All Blacks saw off Wales, Italy and England without conceding a try before setting their sights on a meeting with France in Marseille.
A night to remember

Lièvremont’s side had by that point already done what New Zealand couldn’t – overturn South Africa. Fabien Barcella, the powerful Biarritz prop, had been the star of their 20-13 victory in Toulouse and with a passionate crowd of 60,000 behind them at the Stade Velodrome, expectations were sky high for another big scalp and 2-1 record over the All Blacks for the year.

Clad in white, New Zealand blew away their rivals. The result, given history, perhaps wasn’t a surprise. The manner of it certainly was. Gone were the stop-start combinations of June and July, with Carter turning in a virtuoso display at fly half and Jane, Ma’a Nonu and Smith combining superbly. The back row of Jerome Kaino, McCaw and Kieran Read was dominant and would remain a feature of the side for years to come.
The final score read 39-22. Revenge was theirs for June, although the ghosts had not been laid to rest.

That would have to wait until Rugby World Cup 2011, but the foundations were now in place.

“It was a special day, really, a special day because all the players who played today played their role superbly,” Henry said at the close. “There have been some remarkable wins over the years and that one is a special one because we have had a challenging year and we have won the last six games after being four and four at one stage during the season.”

Lièvremont’s men were downbeat but gracious. They too had enjoyed a fine end to the season, and had plenty of ammunition to fire their efforts when the decisive pool match rolled around. “Sometimes, one has to accept defeat with dignity,” Lièvremont said. “When the All Blacks play like that, attacking the line with complete confidence, they are unstoppable.”

France went on to record a Six Nations Grand Slam in February and March, while the All Blacks won back-to-back Tri Nations titles to build-up to Rugby World Cup 2011. They had their revenge in the Pool A match 37-17 – having introduced a few exciting new faces – and overturned a gritty French fight-back in the final to win 8-7.

Scars healed? Only time will tell with the two sides set to meet again for a three-Test series in New Zealand in June.