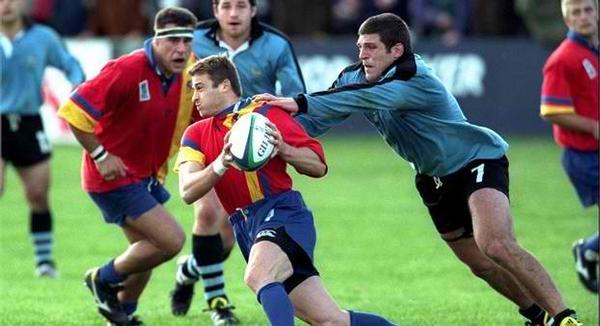 Spain made their RWC debut against Uruguay in 1999 and are hoping to. CREDIT: Rugby World Cup 2015

The European Nations Cup 2014 gets underway again on 2 February as some of Europe’s big names join the qualification race for Rugby World Cup 2015 with the start of the Division 1A competition involving Georgia, Russia, Romania, Spain, Portugal and Belgium.

This division will provide the Europe 1 and Europe 2 qualifiers for England 2015 and when Spain enter the fray with a tough away tie to Russia, they won’t lack for motivation after 13 years away from rugby’s showpiece tournament.

Head coach Bryce Bevin has promised plenty of grit and no little attacking flair in their back-to-back matches against the Bears and Division 1A newcomers Belgium, with confidence at a high following a strong showing in November.

Bevin took 26 players to Namibia to face the Welwitschias and Zimbabwe in a Tri Nations Series, winning both Tests in difficult conditions. The former Auckland and Manawatu representative believes that the experience will have given his players the impetus to brave an onslaught from their hosts.

“That was a great opportunity given to us by the IRB, who funded the November window for us,” he said.

“We really got our team together down there, in very difficult conditions – 40 degree heat, 1,700 metres above sea level.

“There was no air, it was very hot and the players really showed that they’ve got some backbone and commitment. I was very, very happy with the way they committed themselves and came out winners.

“The temperatures put us out of our comfort zone, it was very hard to play. There was no air, with 20 minutes to play the guys couldn’t breathe. We used the bench but some of them had to hang on. It was very, very hard. We certainly don’t lack courage.”

After a failed attempt to organise a further international warm-up in January, Bevin turned to some methods popular in his native New Zealand to put his players through their paces. On 5 January, his Spain side took on Spain A in a keenly-contested trial, with plenty at stake for players on both teams.

“Spain came out winners 42-18 in a very tough match,” he said. “It was a really good hitout and some guys in the Spanish side really stood up and dominated and also three or four candidates in the Spain A side put their hands up and have been included in the group to go away to Russia and Belgium.

“A lot of the things I do are throwbacks to New Zealand in the 1960s and 1970s, without apology. The All Blacks used to go on internal tours and play the provinces, the New Zealand Maori, New Zealand A and New Zealand Juniors - and they lost. We often had Possibles v Probables and named the All Blacks after that, it was quite a common thing.

“I think it’s a great way to do it. When we have these matches there’s totally separate preparation. I don’t go near the Spain A side. We treat it as if it’s a proper international match.

“The Spanish side had everything to lose, but they didn’t. They dominated from the beginning and they [Spain A] got away on us and scored three tries. They never gave up and that was what I was looking for. It was really good, a good occasion.”

Bevin has been hard at work in recent weeks, analysing Russia’s recent matches from November’s IRB International Rugby Series in Colwyn Bay. Kingsley Jones’s men lost out 35-3 to Canada and 40-26 to the USA, but Bevin noticed one striking aspect that his team will have to deal with head-on if they are to get underway with a precious victory.

“They’re very physical and very big, they’ll be bigger than us right across the park,” he said. “We’ll be trying to be smart. We’ve got to roll out a plan and hopefully the conditions will be right, and we can attack all over the field.

“Having said that the key thing, as in most rugby these days, is to stop their big men making yards and getting over the advantage line. We’re just going to have a wall of defence, so that they can’t pass. We’ve got good defenders in the side and a good attitude. I think we’re going to be okay.”

Following their recent success, Bevin has identified a number of players that will be vital if they are to push on towards the latter stages of the qualification battle. Full back César Sempere will be familiar to supporters of Montpellier and Nottingham, while Lille second row Jesús Recuerda has become the lynchpin of the team’s lineout and forward effort. Centre Matias Tudela has also caught the coach’s eye and bagged a try during their 38-37 victory over Namibia.

Bevin’s captain will be Jon Magunazelaia, who has been at the forefront of Gernika’s run in this season’s Amlin Challenge Cup. Despite only having two international caps to his name, the blindside flanker’s leadership qualities impressed the coach during back-to-back victories over Italian side Rovigo.

“He’s a local guy from Gernika, actually an amateur, but he has the respect of his club and certainly our players here,” Bevin said. “He’s a very strong guy who’s not flashy, doesn’t talk much but is in to everything. I think Gernika have had a fantastic campaign in the Amlin, they beat the Italian team twice and he was at the forefront. I really think he’s a top player.”

Spain have drifted from the limelight since their breakthrough appearance at Rugby World Cup 1999 but with new-found determination behind them and a coach out to prove that his players can mix it with the best, that could be about to change.