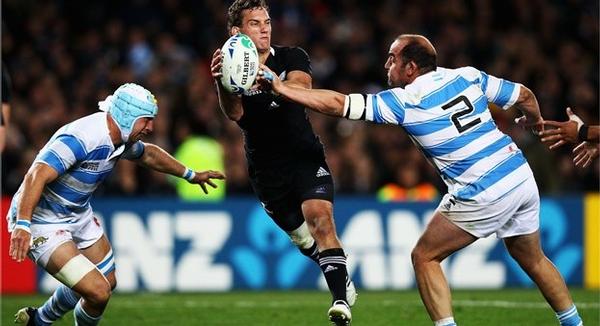 The Rugby World Cup 2015 Pool Allocation Draw last month threw up some mouthwatering matches, so we continue by looking at Pool C, which features defending champions New Zealand, Argentina, Tonga and the Europe 1 and Africa 1 qualifiers.

Defending champions New Zealand would have returned home happy with their Pool C draw for Rugby World Cup 2015. Having comfortably beaten Argentina twice and Tonga three times in previous World Cups, the All Blacks will expect to repeat those successes in a pool that holds little by way of terror for Steve Hansen’s men, who took everything in their stride during 2012 before a long season eventually took its toll and their unbeaten run was ended by England.

On paper, the greatest threat to New Zealand’s chances of winning their pool should come from Argentina. The Pumas have yet to defeat the All Blacks in 16 attempts stretching back to 1985, the closest they came being the 21-21 draw they managed in Buenos Aires in only their second ever meeting. However, Santiago Phelan’s side made huge strides during the inaugural Rugby Championship and are already seeing the benefits of that increased competition.

The two previous Rugby World Cup meetings between the sides coincided with New Zealand hosting the tournament. In 1987, the All Blacks entertained Argentina in their third Pool 3 match in Wellington and came out on top to the tune of 46-15, courtesy of tries from debutant Zinzan Brooke, Kieran Crowley, Andy Earl, Joe Stanley, Alan Whetton and captain David Kirk.
A crowd of 30,000 was present that day but there were twice the number on hand when the sides engaged in Rugby World Cup action for a second time 24 years later in a tense quarter-final in Auckland.

With home expectancy at fever pitch, Phelan’s side shocked their hosts by taking the lead after 30 minutes through Julio Farias Cabello’s well-taken try. Graham Henry’s men required a hero to calm their fraying nerves and that man proved to be scrum half Piri Weepu who, with star fly half Dan Carter invalided out of the tournament, notched six penalties to put New Zealand 18-10 ahead midway through the second half.
The All Blacks then turned the screw and after Kieran Read had crashed over, veteran second row Brad Thorn ran in try number two following great build-up play from Cory Jane and indomitable number 8 Read. New Zealand had dodged the bullet with a 33-10 win.

New Zealand have met their other known Pool C opponents, Tonga, just four times in all, with three of those matches being at Rugby World Cups – in 1999, 2003 and 2011.
The Pool B clash at Bristol’s Ashton Gate in 1999 is still remembered fondly in that city where 22,000 were on hand to see the All Blacks triumph 45-9, with a pair of trademark tries from the peerless Jonah Lomu being augmented by scores from Byron Kelleher, Josh Kronfeld and Norm Maxwell.

Sadly for Tonga, the second World Cup meeting between the sides at Lang Park in Brisbane is one they would rather forget. John Mitchell’s All Blacks were unstoppable that day as they ran out 91-7 winners against a willing but outclassed team of islanders, who resolved to never again be beaten by such a score – which, to their credit, they haven’t.
New Zealand’s try scorers that day were Doug Howlett, Mils Muliaina and Caleb Ralph, who notched two tries apiece, with another seven being contributed by Daniel Braid, Carter, Corey Flynn, Leon McDonald, Kees Meeuws, Carlos Spencer and a penalty try. Pierre Hola claimed Tonga’s lone reply.

The third meeting of the teams at rugby’s quadrennial global gathering was a much grander occasion altogether, as they met on the first night of Rugby World Cup 2011 following a glitzy opening ceremony.
Again the game went the way of the All Blacks, who ran out comfortable 41-10 winners courtesy of tries from Israel Dagg (2), Richard Kahui (2), Jerome Kaino and Ma’a Nonu.

But the Tongans showed their mettle in the second half and never threw the towel in, deservedly scoring late on when prop Sona Taumalolo barged his way over. Tonga are promising further improvements ahead of Rugby World Cup 2015 so New Zealand should beware.

Tonga has never met Argentina so their clash in 2015 will be a first. Nor have they played their prospective Europe 1 opponents, Romania or Georgia, or Africa 1 contenders Zimbabwe and Namibia at a World Cup. However, Argentina has played three of this quartet in recent Rugby World Cups.

In Rugby World Cup 2003, the Pumas defeated Romania 50-3 at Aussie Stadium before repeating the dose in Invercargill in 2011, where they ran out 43-8 winners courtesy of tries from Santiago Fernández, Juan Manuel Leguizamón, Juan Figallo, Lucas Gonzalez Amorosino, Juan Jose Imhoff and Genaro Fessia.
Argentina have twice defeated Georgia – 33-3 at Lyon’s Stade Gerland in 2007 and 25-7 at Palmerston North in 2011, while they have also recorded a pair of crushing victories over Namibia – beating them 67-14 at Gosford in 2003 and 63-3 in Marseille in 2007.

New Zealand have never met Zimbabwe, Namibia or Georgia, but they have played Romania once in Rugby World Cup history. That meeting came in Toulouse in 2007, where the ruthless All Blacks inflicted an 85-8 defeat on their hapless Eastern European opponents, with Joe Rokocoko plundering a hat-trick of tries to go with further scores from Sitiveni Sivivatu (2), Isaia Toeava (2), Nick Evans, Andrew Hore, Howlett, Chris Masoe, Aaron Mauger and Conrad Smith.

Georgia will always remember their first meeting with Namibia in 2007 as the 30-0 win was their first on the Rugby World Cup stage, while Romania also ran out winners against the Africans four years earlier. That match was unusual in that it was the only encounter at RWC 2003 to be staged in Australia’s island state of Tasmania, Romania running out 37-7 winners at York Park in Launceston in front of 15,457 spectators.