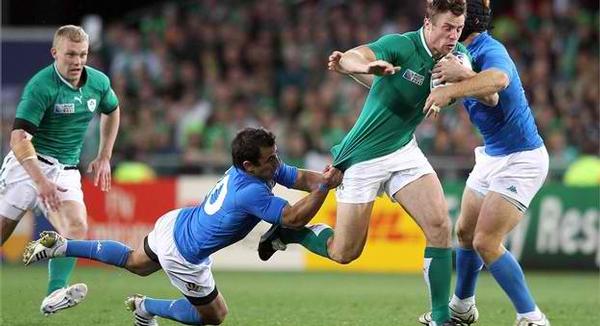 Italy will hope to avenge a loss to Ireland in the RWC 2011 pool stages when they meet again at England 2015. CREDIT: Rugby World Cup 2015

The Rugby World Cup 2015 Pool Allocation Draw last month threw up some mouthwatering matches, so we finish by looking at Pool D, which features France, Ireland, Italy and the Americas 1 and Europe 2 qualifiers.

They say familiarity breeds contempt but in the case of Rugby World Cup Pool D opponents France, Ireland and Italy the feeling is undoubtedly one of mutual respect after many a tough battle between the nations over the years.

Since Italy’s introduction into the Six Nations in 2000 they have met France, the highest ranked team in Pool D, a total of 13 times, but never at a Rugby World Cup, with one memorable victory to their name – in Rome in 2011.

Italy enjoyed three consecutive wins against Ireland before their entry into the Six Nations, including back-to-back victories in 1997, but since being welcomed into the fold they are awaiting further success.

Two of those defeats came in Rugby World Cup warm-up games immediately prior to the 2003 and 2007 tournaments. But they met for real on the big stage, when, in 2011, Ireland ran out 36-6 winners in front of thousands of green-clad supporters in Dunedin.
Two tries from Keith Earls helped Ireland to qualify for the knockout stages as pool winners for the first time, but their interest was to end shortly afterwards with defeat against Wales.

The likelihood is that Ireland will have to beat France at England 2015 to top the pool for a second time. Three previous Rugby World Cup meetings have all gone the way of Les Bleus, with a winning margin of more than 20 points on each occasion.

The first match came at the quarter-final stage of RWC 1995. King’s Park in Durban was the venue for a disappointing forward-orientated affair that was settled by the boot of France’s Thierry Lacroix, who kicked eight penalty goals and a conversion to add to tries from Emile Ntamack and current national team head coach Philippe Saint-Andre.

France won 36-12 but coach Pierre Berbizier knew his side had under-performed on the day. “We may at some stage be able to drink champagne,” he said, “but for the moment, we are struggling to get the cork out of the bottle.”

France were in sparkling form, though, when they faced Ireland eight years later in Australia – again at the quarter-final stage. A breathtaking display of attacking rugby saw France put 37 points on Ireland without reply, hardly the send-off that captain and hooker Keith Wood had imagined in what turned out to be his farewell appearance in the green jersey. Late in the game, Kevin Maggs scored a try and Brian O’Driscoll bagged a brace to bring the final score to 43-21 in France’s favour.

Defeat to France in the penultimate pool match of RWC 2007 left Ireland’s campaign hanging by a thread, while also keeping the hosts’ own hopes alive. Jean Baptiste-Elissalde kicked five penalties before Vincent Clerc, the man who broke Irish hearts in the Six Nations earlier that year, dotted down twice as France won 25-3.

Pool D’s European theme extends to a fourth team, with one of Georgia, Romania or Russia likely to finish as runner-up in the European Nations Cup Division 1A. The second-placed team in what is commonly referred to as the ‘Six Nations B’ will fill the slot reserved for Europe 2.

Privately Ireland will be hoping to avoid Georgia after nearly succumbing to the East Europeans in RWC 2007, the same year that France completely outplayed the Lelos.

One week on from a poor performance against Namibia, Ireland produced another horror show against Georgia in their second pool match. Late in the second half Ireland were trailing 10-7, and the biggest shock in Rugby World Cup history looked to be on the cards until Girvan Dempsey spared their blushes with a late try, which was converted, to make the final score 14-10.

France, meanwhile, had no such trouble in seeing off the Georgians in their final pool clash, running in nine tries in a 64-7 victory.

There are strong historical links between France and Romania, another possible match-up in Pool D. Romania, known as the Oaks, enjoyed a four-year unbeaten spell against France from 1960 to 1964. Two more wins on home soil followed in the early 1980s, before, in 1990, they won away in France for the first time – 12-6 in Auch.

While a number of their players have successfully gone on to play in France’s Top 14 since then, Romania’s fortunes as a rugby nation have faltered over the last two decades.

Stubborn resistance and forward power from Romania kept Ireland at bay for the opening quarter of the match. In the end, two quick-fire tries from the ever-dependable Dempsey settled Irish nerves and they went on to win 45-17.

Italy have never met Georgia at a Rugby World Cup, while their only tournament fixture against Romania resulted in a 24-18 win in 2007.

Russia’s introduction into the Rugby World Cup fray in 2011 saw them drawn against both Ireland and Italy at the pool stages. Italy ran in nine tries in a 53-17 victory in Nelson and Ireland matched the feat five days later, winning 62-12 in Rotorua.

The Americas 1 place in Pool D at RWC 2015 will be filled by either Canada or the USA, who meet in a home-and-away play-off this year. Of the two nations Canada has the better Rugby World Cup record, winning seven of 25 tournament matches and reaching the quarter-final stage in 1991.

Should the USA qualify as Americas 1 it will reunite them with Ireland, who they met at the last Rugby World Cup in New Zealand. The match ended in an unconvincing 22-10 win for Ireland. In 1999, the winning margin was much greater with Ireland running out 53-8 winners.

Italy also clipped the Eagles’ wings at RWC 2011, a ferocious display of scrummaging ultimately proving the difference between the sides in a 27-10 win for the Azzurri.

USA rounded off RWC 2003, arguably their best tournament in terms of performances and results, with a spirited display in a 41-14 defeat to France. After trailing by 26 points at the break, second-half tries from Mike Hercus and back row Kort Schubert meant they could leave for home with their heads held high.