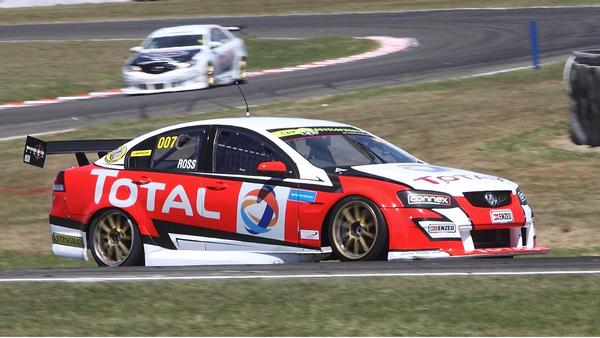 Ross' hopes of Holden dominating at Manfeild came to fruition with himself and Jason Bargwanna sharing the race wins and standing atop of the podium. CREDIT: Little Devil Motorsport Media

Ross Takes His First Win of the Season

A storming pitstop by a crackling crew in the final race of the weekend at Manfeild Park helped Cambridge driver Nick Ross take his first New Generation NZV8s TLX win.

Running in second place behind Australian driver Jason Bargwanna, Ross pitted theTotal Lubricants Holden Commodore early in the race while ahead of Hamilton's Martin Short who pitted in the same lap.

A lightning fast crew performed the compulsory stop in expert fashion having Ross ready to exit the pitlane faster than even he expected helping him to retain his position.

"The boys did a really good job in the pitstop and I was surprised at how quickly they put the car down and signalled me to go nearly catching me off guard." said Ross.

Ross returned to the track still in second place behind Bargwanna and trying to close the gap between the two Holdens.

The Australian entered the pits for his stop and rejoined still ahead of Ross but unfortunately for the V8 Supercars driver shortly after exiting, his car suffered an electrical failure and he pulled onto the grass leaving Ross to claim the race lead which he held to the chequered flag.

Although he was able to restart his Holden Bargwanna lost too much ground to fight for a podium spot.

"Well you never know whether they will be coming back at you in a lap or two so I just put my head down and bum up until I crossed the finish line." said Ross.

The race win in the TLX class topped off a very successful weekend of racing which saw Ross place second in race one and third in race two.

He missed out on stealing the overall round win from Bargwanna by a whisker with a mere two points between the two Holden drivers.

"It would have been nice for us to get the overall win I was catching Short in the second race but didnt quite have the grip coming out of the corners to get close enough to get him under braking and had to settle for third place." he said.

Ross' hopes of Holden dominating at Manfeild came to fruition with himself and Jason Bargwanna sharing the race wins and standing atop of the two top steps of the podium at the end of the weekend's racing. Hamilton's Martin Short was third.

"That was the plan, I would have liked to have been the overall winner but I am looking forward to Taupo and seeing what we can do there."

"The crew are quickly getting to grips with the new car and what they can do with it when setting it up. For me it was great getting back into the new car after coming back from the South Island and I can't wait for the next round." he said.

"Haydn did a good job for his first weekend in the new car and getting to grips with it so quickly. I think if we get through this season as successfully as things have gone so far we will see a lot of new cars being built for the next one." said Ross.

The TLX cars were joined by a strong contingent of the older NZV8s TL class bringing a field of 16 cars overall to Manfeild offering the spectators some very entertaining and competitive racing over the weekend.

Perhaps most exciting was the final race of the weekend where the format requires the faster TLX cars to start at the rear of the grid and complete a compulsory pitstop resulting in the drivers having to make their way through the field of TL cars twice.

Auckland driver Andrew Anderson held out against the TLX cars to win the final race outright.

He also took the TL class win for the weekend in his Holden Commodore with Kevin Williams also of Auckland in another Holden placing second.

Round four at Taupo takes place over the weekend of March 8-10 which is followed by the championship final at Pukekohe April 12-14 which will run as support to the Australian V8 Supercars.