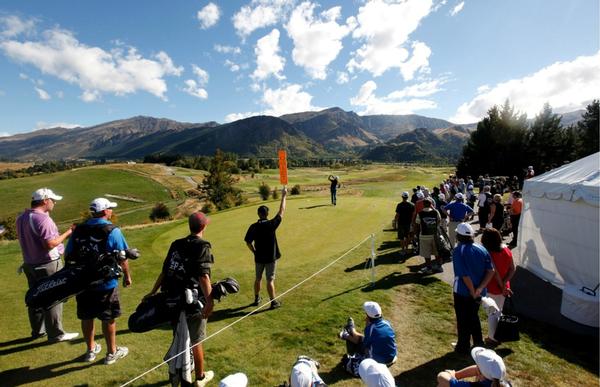 Easy transport option for NZ PGA Championship at The Hills

Spectators heading to the NZ PGA Championship at The Hills in Queenstown later this month are encouraged to take advantage of a bus service run by a local transport company.

Efficient and economical transfers to and from The Hills will be provided by ski area operator NZSki, sister company to one of the tournament’s major sponsors, Milford Track Guided Walk.

NZSki Transport Manager Etienne Raubenheimer said it was important people found it easy to get to the event and take part in the action.

“With the NZSki bus fleet sitting waiting for winter, it makes complete sense for the company to offer this service over the four day tournament,” he said.

“The first buses will pick up at the Station Building in Queenstown at 9am and run every other hour until the last bus at 5pm. They will also pick up at Frankton Bus Stop on the way out and back, and the frequency will ramp up to hourly departures on Saturday and Sunday.”

A highlight of this year’s event, apart from the exceptional golf, is ‘The 19th’ entertainment area, featuring the best Central Otago food, wine and entertainment. This year all those at the Championship will be treated to a special open-air concert on the Saturday night featuring local band The Lynch Mob and young Auckland musician Jamie McDell, who will headline the event.

To enable people to attend the concert and make the most of the increased entertainment this year, buses will run until the concert finishes, with the last bus returning to Queenstown at 9.30pm.

Mr Raubenheimer said while there was extensive parking available at The Hills, if people wanted to attend the concert and make the most of hospitality options available, the bus transport was “the way to go”.

“A trip each way from Queenstown to The Hills will be just $6, and with the frequency of the service it makes sense to catch the bus on any day of the tournament and avoid having to worry about driving.”

For those who wish to drive, extensive car parking is also available at The Hills for either $10 a day or $10 for a season pass for the whole four days of the tournament.

Cost is $6 each way and is a cash-only service