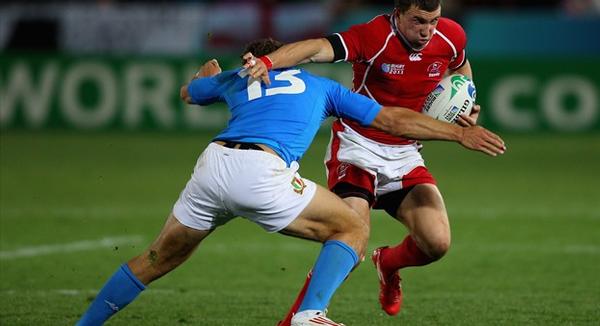 Artemyev the inspiration for Russian players

Vasily Artemyev certainly took the road less travelled to international rugby, and the Russia wing will need every drop of his experience to help his side navigate Division 1A of the European Nations Cup 2014.

With qualification for Rugby World Cup 2015 dangling at the end of the tough competition spanning two years, each side has battled frantically in the opening couple of rounds.

Artemyev and Russia, having beaten Spain 13-9 in their opening match, let a five-point lead slip in the closing stages of their second encounter to lose 29-14 to Romania in Bucharest on 9 February.

Next up for the Bears is a challenging home tie with neighbours and defending champions Georgia, who are one of the teams Russia want to emulate by becoming Rugby World Cup regulars.

Artemyev is convinced that the qualification race will go the distance, and that Russia can avoid becoming one-hit wonders after their bow at the sport’s showpiece event in 2011.

“All six teams seem to be up for it and there’s loads of competition,” he said. “It’s just two games gone and everything to play for for every team. We’ve proved, first of all to ourselves, that we’re capable of doing that [qualifying] and there’s no reason why we can’t do it again this time around, and be there on the big stage to produce a better result.

“We’ve set high goals for ourselves, and it’s a long qualification period. It is 10 games that will be played and it’s important to know the ultimate goal so you can take every game from now on as the one you’ve got to perform in, that you’ve got to be at your best. We know that these results are going to matter in two years’ time.”

If any player in the Russia set-up is in a perfect position to deal with the added pressure, it’s Artemyev. Despite being only 25, he has plenty of rugby experience to call on.

The first Russian to play top-flight rugby in England, the Moscow native picked up his skills during a spell studying in Ireland. While at University College Dublin he won honours with Ireland Schools before graduating to their Under 19s and the Leinster Academy, developing an Irish tilt to his accent in the process.

He has become something of a trailblazer to his teammates and he insists that there is a conveyor belt of Russian talent now itching to experience rugby at the highest level across Europe. In Artemyev’s opinion, that can only be a good thing.

“I know there a good few keen young players that really want to experience European rugby and hopefully they’ll get their opportunity to do so. It would definitely bring some more experience into the squad and with players abroad we can start sharing the experience of playing, game management and a high tempo that we’re used to week-in, week-out. We can introduce it and help the other players to adjust better.”

The major example for young Russian players remains the class of 2011 though, Artemyev among them. By reaching a maiden Rugby World Cup they gave new impetus to aspiring players and, perhaps more importantly, gained the belief that they belonged at elite level.

Despite suffering some heavy defeats while in New Zealand, the Bears showed glimpses of their best, when they are able to combine a gritty pack of forwards with pace and precision in the backs. Across matches against Australia, Italy and Ireland they managed eight tries.

“There’s still a good few guys in the Russian squad now who’ve been over in New Zealand at the World Cup. They know what it’s like and they’re the first generation of Russian rugby players who have experienced that tournament.

“We want to share and there have been big auditions from the younger lads coming into the squad, putting their hands up for selection and making the coach’s job hard every week.

Immediately after the Rugby World Cup, Artemyev touched down at Northampton Saints and promptly scored a hat-trick on debut against Saracens in an Anglo-Welsh tie. Central to his recruitment was a superb display for Russia at the Churchill Cup in 2010, including a try against the England Saxons.

Since joining the Saints he has noticed an upturn in his game, and with it further ammunition to take onto the international stage.

“This experience, being used to playing at a high tempo and high intensity, pretty much every week in the Premiership has helped me a load. You just seem to have so much more time on the ball, to make decisions in the game and you’re able to get involved a lot more. That’s what they teach you over in England.

“I studied and lived in Ireland for six or seven years and it helped me in terms of adjusting. It didn’t take me long to adjust to the lifestyle over here in England, I didn’t have a language barrier or anything like that, which some players might have. It certainly played its part, it helped to smoothly introduce me to England’s rugby world.”