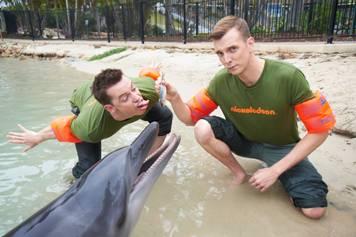 Production on the ninth season of Nick’s original, multi-award winning series is set to commence next month after this year’s eight gutsy finalists have been chosen from the thousands of audition entries that have been flooding in since solicitation began in January. Entries close Friday March 1 so hopeful Kiwi campers only have a few days left to submit their auditions to Nick HQ either by post or, for the first time, online at www.nicknz.co.nz

Venturing into brand new territory, filming will move from a secret bush-land location to a place packed with action, Sea World on the QLD Gold Coast.

“This year is going to be huge”, said Executive Producer and Network Creative Director at Nickelodeon, Kristie Phelan.  “For our ninth season, we really wanted to pump up the adrenaline and offer the kids, both at camp and at home, an unforgettable, action packed experience that still featured the Camp Orange elements of mess, adventure and friendship that is at the heart of the series.”

“You know what they say, never work with children or animals and this season we’re working with both! It’s going to be crazy ride but we know it’s going to make for hilarious moments both on-screen and behind the scenes. “

“This season will again be produced entirely in‐house by the Australian Nickelodeon team and we are all really excited to bring our audience along on a brand new adventure through this much loved series.”

Premiering in New Zealand on Tuesday June 25 at 5pm on Nickelodeon exclusively to Sky, Camp Orange: Spill Seekers will see the return of ASTRA Award winning comedic combo Luke and Wyatt as they host four teams of brave best friends through a sea of super soaked adrenaline surging challenges that will test wits, bravery, dexterity... and stomachs.  Adding to the chaos and comedy, Sea World’s resident animals such as the polar bears and seals will also make a starring appearance in the show.

For the first time in Camp Orange history, the coveted title of Champ Orange will be decided by Kiwi and Aussie kids who are watching all the action at home.  This year, viewers can  vote on the team that they deem best and fairest to take out the ultimate honour, awarded to the team that best displays the Camp Orange spirit of friendship and fair play.  Also for the first time, kids at home will be able to select each night’s Wrong Town Dinners online! Wrong Town dinners are a gross, very ‘wrong’ surprise meal that teams can either choose to eat themselves or pass on to another team and are trademark element of the Camp Orange series. Behind the scenes and other exclusive added content will also be made available online at www.nicknz.co.nz including the very best audition videos.