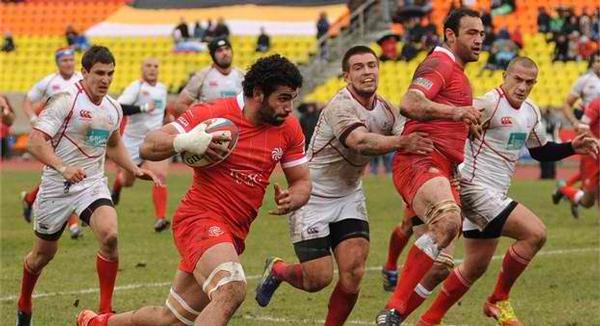 Viktor Kolelishvili scored one of Georgia's tries as they beat Russia to move top of the Division 1A standings. CREDIT: Tamar Kulumbegashvili

Georgia and Romania continue to set the pace in the European Nations Cup 2014 Division 1A after beating Russia and Spain respectively to remain unbeaten after three rounds of the competition that will determine the region’s two qualifiers for Rugby World Cup 2015.

The defending champions ran out 23-9 winners of neighbours Russia in Sochi and have inched ahead of Romania in the standings by virtue of scoring more tries in the three rounds so far. Romania also won away from home, beating Spain 25-15 in Gijon.

Leading the chase now to catch Georgia and Romania is Portugal after they picked up their first win of the competition spanning two years with a hard-fought 18-12 victory over Portugal in Lisbon.

Portugal have five points after three rounds – seven fewer than the leading pair – with Belgium and Russia on four points and Spain bottom with three points. Spain and Belgium are the only two sides yet to taste victory this year.

Georgia’s visit to Sochi was the highlight of the round with the defending champions eager to repeat their 46-0 mauling of their fellow RWC 2011 participants last time out.

The margin of victory may not have been so great in 2013, but tries from second half Viktor Kolelishvili and David Kubriashvili helped turn a slender 6-3 half-time advantage into a comfortable win on the scoreboard.

Romania had had to come from behind to beat Russia last time out but they were never headed in Gijon with centre Florin Vlaicu kicking 20 of their points with six penalties and the conversion to Catalin Fercu’s first-half try.

Alan Williams had rescued a 21-21 draw for Belgium against Spain a fortnight ago, but while the full back kicked all of the points for the Division 1A newcomers, it was Portugal who emerged victorious at the Estadio Universitario in Lisbon.

Wing Gonçalo Foro scored a try in each half to help Portugal win in front of their fans and Os Lobos will hope to repeat the home victory when they take on Russia in Coimbra on 9 March. The other matches in round four see Belgium host Romania in Brussels and Georgia tackle Spain in Tbilisi.