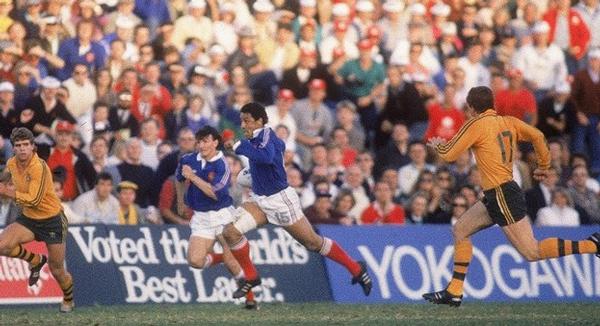 As we continue to build towards the forthcoming venue and match schedule announcement for Rugby World Cup 2015, we take a look back at some iconic tournament grounds that have slipped under the radar.

Many will tell you that bigger is better. But what of the other stadiums on the Rugby World Cup scene? Throughout the tournament’s history there have been classic contests in the pool stages and early knockout phases, when provincial grounds have become the centre of the rugby world and grand old stages have been used for one more show-stopper.

Here we run through just a few of the stadiums to have left an indelible mark on the tournament – with the help of some of our friends on the Rugby World Cup Facebook page – thanks to special atmospheres, unforgettable moments of on-field skill and that special kind of pressure found at the sharp end. They may not have hosted the final, but their place in Rugby World Cup history is assured.

Tournament matches: Six
You might remember it from: Serge Blanco’s last-gasp winner against Australia

Located in Sydney’s suburbs and redeveloped in 1985, the Concord Oval opened its gates for the inaugural Rugby World Cup as co-host of Pool 1 - alongside Brisbane’s Ballymore. The Wallabies headlined the cast in their own back yard, with England, the USA and Japan making up the contenders.

Australia took top spot with three victories, including a David Campese-inspired 19-6 win over England at Concord, and proceeded to the knockout stages. Thanks to a brace of tries from wing Matt Burke they were able to delight just over 14,000 fans by beating Ireland in the quarter-finals, with France lying in wait after a last eight victory over Fiji.

By this point the Wallabies could look on the Concord Oval as a second home, having enjoyed an unbeaten run in its surroundings. France had different ideas. In a match played under a fading sun – the ground didn’t possess floodlights – Serge Blanco shattered the hopes of the home side and their 17,000 fans with one of the tournament’s most-celebrated tries. The match finished 30-24 to Les Bleus, and the Concord Oval’s Rugby World Cup journey ended along with the Wallabies’. It remains home to West Harbour in Sydney’s Shute Shield competition, but hosted its last Test match in 1988.

Tournament matches: Three
You might remember it from: Fiji’s victory over Wales

The home of Ligue 2 football side FC Nantes, the Stade de la Beaujoire got its career in international rugby underway with a bang. Only two years after holding its first football match, the stadium played host to 45,000 fans in 1986 as France defeated New Zealand 16-3 thanks to tries from Denis Charvet and Alain Lorieux.

Nantes’ rugby fans would have to wait some time for another taste of international action, but just over two decades later their wish was granted as Rugby World Cup 2007 rumbled into town. Its first two tournament matches were entertaining affairs – as Wales and England saw off Canada and Samoa respectively – but few could have predicted the fireworks to follow.

With more than 37,000 fans in attendance, Fiji tipped the tournament on its head by securing their first ever win over Wales in a knockout match. Very few matches at Rugby World Cups have produced this level of drama, with the lead changing hands throughout a thrilling second half as a total of nine tries were scored.
Wales battled back from 25-10 down at the break to lead in the dying moments, only for Fijian prop Graham Dewes to wriggle over for his side’s fourth try and a 38-34 win. There was nowhere to turn for Wales, who lost coach Gareth Jenkins in the aftermath, but Fiji celebrated a second appearance in the knockout stages and an all-time high in the IRB World Rankings. Their next move was to push South Africa, the eventual champions, to the limit in the quarter-finals.

Tournament matches: Nine
You might remember it from: A certain David Campese pass

The home of Irish rugby, Lansdowne Road boasted a history as rich and varied as any other major ground.  From the days of Jackie Kyle and Karl Mullen through to Brian O’Driscoll and Keith Wood, via Mike Gibson and Fergus Slattery, many special things occurred within its boundaries.

Perhaps the most special was reserved for an October day in 1991, when Australia – fresh from a thrilling 19-18 victory over Ireland – took on New Zealand in the Rugby World Cup semi-finals. By this point, David Campese had already become one of the tournament’s darlings, and scored one of his most famous tries in the defeat of Ireland, but few could have expected his latest daring move.

With a packed house of more than 50,000, Campo changed the game with a try and spectacular assist for Tim Horan. In what has become the classic ‘miracle pass’, the Australian wing attacked the New Zealand defence before throwing an audacious no-look ball over his shoulder to set Horan free. It remains one of rugby’s finest moments, and a timeless Lansdowne Road memory.

Tournament matches: Four
You might remember it from: Its thunderous, enclosed atmosphere

Carisbrook, Dunedin’s famous old ground, didn’t go quietly into the night. The ‘House of Pain’ hosted New Zealand 38 times between 1908 and 2011, with the All Blacks only losing on five occasions. As Rugby World Cup 2011 came into view though, it was time for a change at the bottom of the South Island.

Boasting a state-of-the-art transparent roof – made from ETFE, a polymer initially for use in space programmes – the new Otago Stadium allowed fans to sit under the sunshine while enjoying the raucous indoor atmosphere generated by fans of England, Argentina, Ireland, Italy, Romania and Georgia.

The first Test match staged at the ground was England’s pool victory over the Pumas, but perhaps the best display under the roof came from Ireland in their 36-6 win over Italy some weeks later. On that occasion the sea of green in the stands saw O’Driscoll and Keith Earls star, although the stadium is also likely to feature on highlight reels for years to come after Bryan Habana’s stunning solo try for South Africa against the All Blacks during the inaugural Rugby Championship in 2012.

Tournament matches: Six
You might remember it from: A little meeting between France and England

So old is the rivalry that new chapters must be placed in the context of past deeds. In terms of France and England, few matches have come close to the ferocity of the Rugby World Cup quarter-final contested by the sides at Parc des Princes in 1991.

The current home of Paris St. Germain and their galaxy of football stars, the Parc also served France well with an intimidating atmosphere as they sought revenge against an England team that had cruelly denied them in a Grand Slam decider for the preceding Five Nations. Rugby is a game of skill and power and on this occasion, it was power that left its mark.

Few can forget Mickey Skinner’s huge tackle on a rampaging Marc Cécillon close to the England line, nor the stare-down with Eric Champ that followed. England eventually won a game of pure theatre with tries from Will Carling and Rory Underwood, progressing to another crunch tie against Scotland at Murrayfield in the last four. As far as double-headers go, there are few tougher.