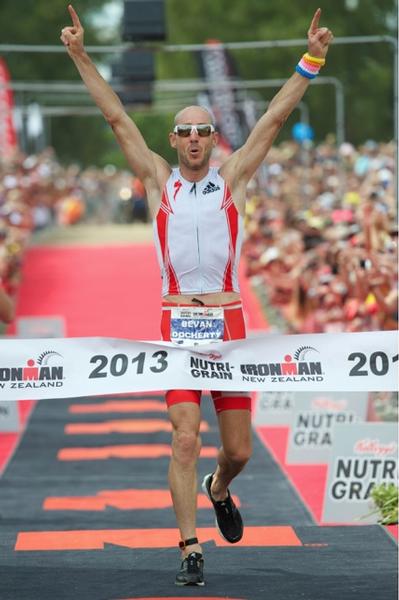 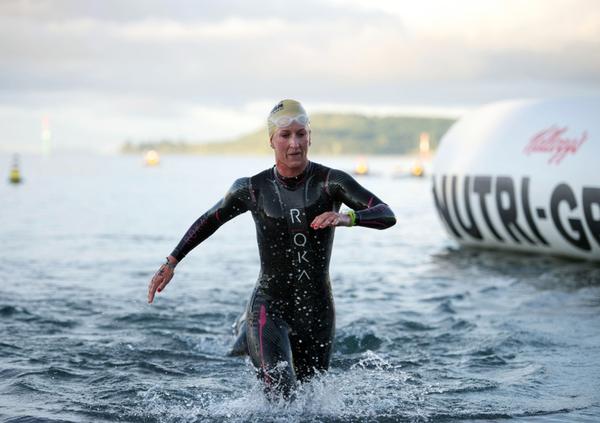 Two-time Olympic medallist Bevan Docherty, on the back of huge hometown support, smashed a classy field and the course record to win on debut in the Kellogg’s Nutri-Grain Ironman New Zealand in Taupo today.

On a day when the weather in Taupo was absolutely perfect for Ironman racing, the prospect of some record-breaking times was always on the cards, but Docherty’s dissection of a class field was not predicted.

Docherty, the former ITU world champion, turned to long course racing professionally last year at Panama 70.3 when he beat Lance Armstrong in the controversial snub race. Even then it was obvious Docherty meant business and Armstrong knew it, but whether Docherty thought his first Ironman title would come so soon is another thing.

“I guess I was a rookie because I went a bit hard in the swim behind Marko and I don’t know why I made the break with 40kms to go on the bike because I paid for it,” Docherty said.

“It was a matter of finishing as quickly as I could because the body was beginning to shut down. To get a course record was a bonus.

“This is hard. I went in to some deep dark place out there with about 10km to go. I actually walked and I suffered for 3km, got some Coke into me and got some feeling back.”

From the start of the swim where Albert lead the pack, Docherty stuck to his feet and never let them out of his sight.  Cameron Brown was always in the chase pack but had a good swim, however, chase was the key word in today’s race as Albert and Docherty lead the bike from start to finish.

As the kilometres ticked by the lead pair just tugged away at any attempt to chase them down before Docherty made his move to open a two minute lead off the 180km bike.

While 2008 Ironman 70.3 World Champion Terenzo Bozzone made an early move to close the gap on the bike before withdrawing in the run, and 10-time Ironman New Zealand champion Cameron Brown tried to close on the run but it was Docherty who reigned supreme.

Sceptics did wonder whether Docherty had it in him to go the long haul with questions about pacing on the bike and handling nutrition over an eight hour period but as he cruised down the finish chute everyone could see he’d got it just right.

“It was pretty amazing out there. To win first up here in my hometown was pretty special. It was a great day, the sun was shining, the people were out supporting. It really showed off Taupo perfectly.

“I hope the race stays here. And if it does I will always support it.

“Now I will have a good break and spend some time with the family. And then I will plan for Hawaii.

“I really appreciate how these guys do it. It is freaking crazy. But at the same time I see the attraction. It is a real drug. And the last 500m down the chute is why we do the sport.”

Albert finished 10 minutes back in 8:25:30 but still nine minutes clear of Brown, who was trying to become the second oldest man to win an Ironman race. In the end he had to settle for third, his first loss in Taupo over the full Ironman here since 2000.

“Bevan was fantastic today. I just had nothing. I tried on the bike but he kept going away and I pushed on the run but had nothing. He deserved it for sure today.”

The women’s race was always going to be a bit of a two horse race with last year’s 70.3 winner Kessler keen to come back to Taupo to do the job properly.

The expected close duel in the water did not eventuate with Kessler leading from the start with a brilliant swim coming out fourth overall in 47:37 to open an unexpected four-minute advantage over Crawford.

The 34-year-old from San Francisco was seven minutes ahead after the bike but Crawford came back late to finish just over three minutes behind.

“You know, when you have someone of Gina’s calibre, currently seventh in the world on your tail you can never really let up but right up until the 30km mark on the run I thought I’d handled it well, it was only at 30km that the wheels started to come off and I had to dig deep,” Kessler said.

Both Gina and Meredith said despite perfect weather conditions there was definitely something out there today that made for a very tiring race, “buggered” was Gina’s description whilst Meredith just wanted to crawl into the foetal position as soon as possible.

Crawford said she had never felt as shattered after an ironman race, after pushing hard to close the gap on Kessler throughout.

Fellow Kiwi Candice Hammond from Cambridge stood up Kessler by a whopping 16 minutes out of the swim but managed to match the American around the rest of the course to finish third.