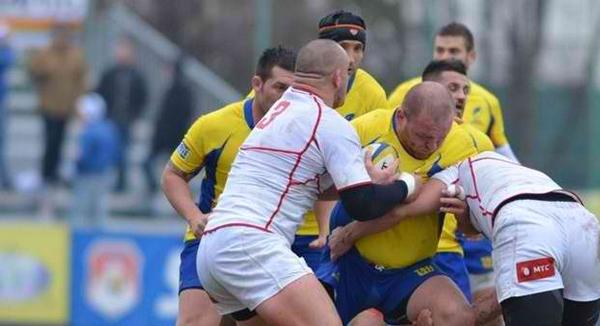 Romania eye a place in the spotlight

It’s fair to say that Romania have hit the ground running in Division 1A of the European Nations Cup 2014.

The Oaks are currently three from three following a 25-15 away victory over Spain last time out and director of rugby Lynn Howells has called on his side to secure qualification for Rugby World Cup 2015 as early as possible.

During the qualification process for Rugby World Cup 2011, Romania forced their way in through the Répechage after beating Uruguay home and away, but Howells is keen to avoid taking the long road to the tournament this time around.

The former Pontypridd, Edinburgh and Wales coach has his sights trained on a feisty Belgium team in this weekend’s round of action and is acutely aware that should they pick up another victory, then the ball will be in their court when Division 1A concludes in 2014.

“We’d like to get those things out of the way, and guarantee a place at the World Cup,” admitted Howells.

“It’s about qualifying as early as we can. We’ve done well up to now, and long may it continue.

“Belgium are a very good team. I think people out here have been a little bit shocked. They are a good side and what they do is they play with their hearts and a good spirit. If we can go to Belgium and get a result, that’s four wins and three of them are away from home. Those three teams have to come to us to play next year.”

Eyes on the prize

Romania’s perennial rivals Georgia are neck and neck with them at the top of the Division 1A standings, with the two heavyweights set to meet in Bucharest on 16 March.

Howells is no stranger to big rivalries but is determined to keep his men on an even keel. For him, qualifying for Rugby World Cup 2015 is all that matters.

Georgia can expect a fearsome welcome when they touch down for the game, and Howells has been impressed by the passionate support generated by Romania’s faithful, both at home and abroad. Certainly, it won’t be an easy ride for any team requiring a result in Bucharest.

“I’ve enjoyed every minute,” he said. “It’s always good with fans, and they’re no different to anywhere else in the world. They’re just passionate about Romania. The players respond to it and it’s a good stadium to be in when we’re playing international rugby. It always surprises me how many supporters have been to the away games. That really is something when you think of the distances we travel.”

Romania’s recent resurgence has not been the result of an overnight fix. During 2012 they held their nerve to claim the IRB Nations Cup for the first time and with it their first piece of silverware since 2006. Since that triumph, Howells has been looking at the long-term and has drafted in a number of new, young players to help the Oaks kick on.

At the heart of his efforts has been a desire to play to Romania’s strengths, namely the set piece and tight-five forwards. During Howells’ tenure, several front row players have been invited for trials with leading European clubs – including Cardiff Blues and Leicester Tigers – and despite a couple of speed bumps, he believes that this is further evidence of the talent available to his team in the forwards.

“We’ve brought younger players in, we knew we had to do that if we were going to progress,” he said. “It was a great fillip for the country, a good competition and the boys played very well. It showed to me where the strengths are in Romania, and there’s no point in us trying to play like Wales, or England or New Zealand. We have to play the Romanian way, which is a forward battle.

“Two players went over to the Blues, and this season we’ve had another prop go over to Leicester. They’re being recognised as talents. What they are not is ready to play at that level. They have to work hard when they get there and it’s mainly conditioning.

“The nuts and bolts, scrums and lineouts, they are already very good at. They just need to be conditioned to be able to play at that level. People are beginning to realise that the talent is here in Romania, in the front-five, and really, people ought to take notice.”

Howells’ team are on their way to making the wider rugby world sit up and take note, and nothing would do that quite like beating Georgia to the European Nations Cup title.

Howells is certainly no stranger to the Rugby World Cup stage. In 1999 he was one of Graham Henry’s lieutenants as hosts Wales made the quarter-finals. He understands the tournament, and its importance to emerging powers, and is determined for his players to have their chance to shine on the sport’s grandest stage.

“I was a forwards coach with Wales in 1999, with Graham Henry. I know what the competition is and it’s different, completely, to anything else in world rugby. Everybody wants to be there.

“Romania have no pretences about winning the World Cup, but what they have got is a chance to go there and give some very good performances, make people look up. That’s about the only stage where that tends to happen, when the world public has the chance to see Romania play.

“The players set the goal early on when we came together. They realise that this competition is different to when we play in the two years when you’re not qualifying for the World Cup. They realise the stakes that are there, and it’s a big thing to go to a World Cup. They’ll give their best to try and get there.”