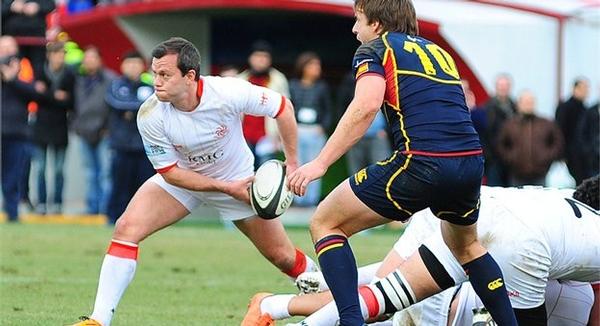 Georgia ensured that captain Irakli Abuseridze went off into retirement in style with an emphatic 61-18 victory over Spain in Tbilisi on Saturday to remain unbeaten in the European Nations Cup 2014 Division 1A after four rounds.

The match was his 85th Test for Georgia, the scrum half having made his debut back in 2000 and helped the Lelos establish themselves on the world stage, playing at three Rugby World Cups and winning the European Nations Cup five times.

“Unfortunately there comes a day in your career when you have to give up what you like the most, but that is how it goes,” Abuseridze said at the official function after the match at the Mikheil Meskhi Stadium.

“I think that the main thing is to keep and never lose the dignity. As for the team, I have been with the boys for a very long time, they are like my family. I wish them victories and success, and as for me I will always be by their side.”

Georgia’s most capped player bowed out of international rugby at the hour mark with his side leading 40-13, ironically to be replaced by a young scrum half making his Test debut in Vazha Khutsiashvili.

The two sides had been level at 6-6 after 21 minutes, but Georgia pulled clear with three converted tries through number 8 Dimitri Basilaia, centre Merab Sharikadze and full back Lasha Khmaladze to lead 30-6 at half-time.

There was no let up after the break with further tries from wing Irakli Machkhaneli, prop Vasil Kakovin, Basilaia and a brace by wing Tamaz Mchedlidze ensured Georgia scored 60 or more points against Spain for the second match in a row in Tbilisi.

Georgia’s victory ensures they remain on top of the Division 1A standings and will face Romania in Bucharest this weekend to determine who wins the 2013 title and will occupy top spot at the halfway stage of RWC 2015 qualification.

Romania, like Georgia, have won four from four in 2013 after overcoming Belgium 32-14 in Brussels on Saturday, the Lelos occupying top spot though by virtue of their better point differential.

Belgium have impressed on their debut in Division 1A and trailed only 15-9 at half-time with three penalties by full back Alan Williams cancelled out by hooker Andrei Radoi’s try and penalty try awarded by referee Andy Ireland.

By the time the clock hit 56 minutes, that lead had grown to 29-9 with flanker Mihai Macovei and fly half Ionut Dimofte touching down for Romania. Belgium did cross the try-line through number 8 Thomas de Molder but there was no way back for the hosts.

The weekend’s other Division 1A encounter was somewhat closer with Vasily Artemyev’s try five minutes from time securing a 31-23 victory for Russia over their hosts Portugal in Coimbra, a result which lifts them to third in the standings.

Portugal had led 18-10 at half-time with six penalties cancelling out Vladimir Ostroushko’s try for the visitors, but Russia hit the front within eight minutes of the restart after tries by second row Kirill Kulemin and flanker Andrey Temnov.

Russia’s advantage was cut to just a point with Aderito Esteves 55th minute try, but Northampton Saints wing Artemyev ensured his side picked up their first try-scoring bonus point of the season.

While Division 1A will determine the Europe 1 and Europe 2 qualifiers for Rugby World Cup 2015, five other divisions of the European Nations Cup 2014 are also part of this regional qualification process in 2012/13.

Germany has increased their lead at the top of Division 1B to six points after beating the Czech Republic 27-8 in Prague, although they have played a game more than their rivals Ukraine and Sweden, and two more than Poland who are a further point behind.

Centre Pieter Jordaan scored two first-half tries to give Germany a 10-5 lead at the break and that had grown to 27-5 within 10 minutes of the restart after scrum half Sean Armstrong and wing Marten Strauch touched down, leaving no way back for the Czech Republic.

The European Nations Cup 2014 continues on Saturday when Moldova host the Czech Republic in Division 1B and Romania host Georgia in Bucharest, Spain welcome Portugal to Santiago de Compostela and Belgium travel to Sochi to face Russia in Division 1A.

SEE HOW THESE MATCHES IMPACTED THE IRB WORLD RANKINGS >>