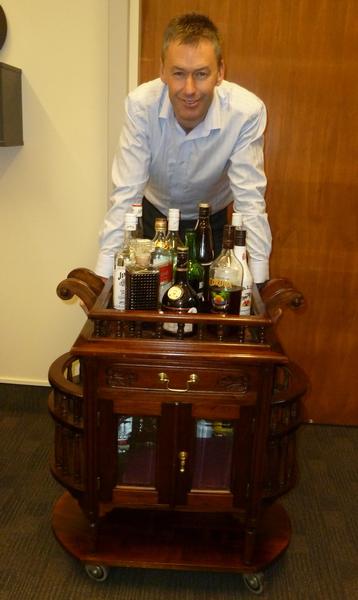 It’s been eight years since travel and tourism specialist Tony Laker’s father passed away, but he left behind a lasting legacy for Hospice Southland – the special mobile “drinks trolley” set up by the Laker family in his memory, wheeled out every day at 5pm at “Happy Hour” for the patients and their waiting families.

Laker, who owns Lakers Invercargill, part of the House of Travel brand, wants to let other House of Travel operators throughout New Zealand know that supporting local hospices is one way they can contribute toward charitable causes.

“The drinks trolley is just one idea they can use. Before my late father passed away, he asked me to look after the hospice because they had been so good to him. One of the things we had noticed was that when my father was being looked after at hospice, he had a little fridge in his room which had drinks in it – so we thought it would be a great idea to extend that to a regular basis to everyone at hospice.”

Laker says whenever Lakers Invercargill staff take work-related trips, they are under special instructions to ring Hospice Southland to find out which drinks need refilling for the trolley so they can make a shopping list for duty-free alcohol.

“The most popular drinks are probably the brandy and sherry, and we’ve noticed that the gin bottle also always needs to be replaced whenever someone goes away! It’s not all alcoholic spirits though – we have soft drinks for people who prefer them, and a lot of the guys like to have a beer. The drinks aren’t just for patients, it’s for families too.”

Apart from the drinks trolley, Lakers Invercargill staff are also given time off to go down and help out staff at the hospice with chores such as cleaning, or bucket rattling for public donations.
The trolley which wheels the drinks round the hospice during the daily 5pm Happy Hour was purchased from a department store in Invercargill, but Laker, with his Kiwi no 8 wire attitude, decided to “customise” the trolley by putting bigger wheels on it to make it more solid for everyday use.

“My wife Tracey and I started Lakers Invercargill in March 1, 1999 – that’s 14 years in the travel and tourism business. It’s a cliché to say this, but the part of the job I enjoy the most is making people’s dream holidays come true. It might not seem like much, but many of our customers save up for a long time to take these trips. Our motto has always been, ‘to exceed expectations’, and I hope we’ve achieved that for most people,” says Laker.