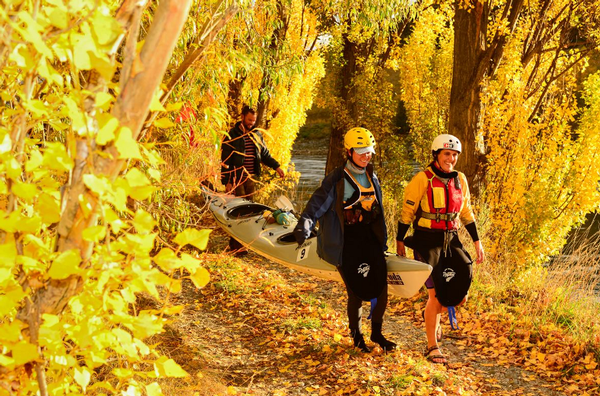 Lead from start to finish in Wild Descent

The winners of the four day Wild Descent kayak race that finished at Molyneux Bay near Kaka Point on Sunday held on to the lead from day one with a combination of determination and fast paddling.

“They started this mornings leg with a 9.33 minute lead and had a super fast time over the 44km to Molyneux Bay. It was very pacey and a gutsy effort by Matt and Michael who have lead from the day one and worked hard to hold on to their position and come through as the ultimate winners.”

The top ten teams out of the 27 contesting the race entered Stage 4 on Sunday at Clydevale with a staggered start according to their positions.

“There was quite a fierce battle at the very end for second and third place with Ian and Wendy actually starting this morning in second with a 17 second lead over Keith and Bob. They paddled most of this river section together and then had a mad sprint with Keith and Bob just grasping second place by only a second.”

One boat capsized on the last leg to Molyneux Bay but was quickly sorted and one team who were racing in sixth position took the wrong route after Balcultha where the river spits in two. Mr Bates says they ended up paddling out into the Pacific Ocean but were being picked up and bought back to Kaka Point Café for prize giving.

The race is the first of its kind to be held on the Clutha River and Mr Bates says the response has been tremendous from both competitors and the towns in which the race has travelled through.

“Its been very well received by everyone and the Clutha has really inspired the racers with its unique historic character and fast moving water. There is a lot of different aspects to this area of the South Island and we can see the event becoming a regular feature.