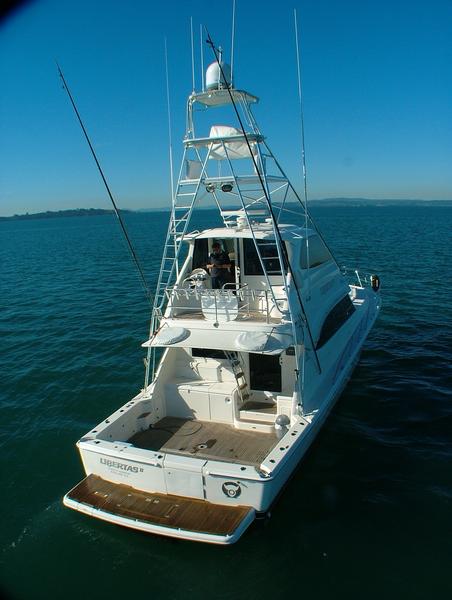 One of New Zealand’s most decorated big game fishing boats has been placed on the market for sale for $1.15million.


The 60 foot Riviera Millennium Libertas based out of Auckland’s Viaduct Basin has won a stack of international, national and one-base competitions during its eight years on the water.

The Australian-built Libertas has a 16 foot beam and is powered by two 1000 horse power C-18s which deliver a top speed of 30 knots at 2300 rpm, with a 6500 litre fuel capacity. The vessel has cruising speed of approximately 23 knots at 1900rpm. Underwater exhausts keep engine noise to a minimum when cruising.

Weighing in unfuelled at 30.5 tonnes, Libertas is built out of hand-laid solid fiberglass with a rugged system of transverse and longitudinal stringers. Riviera’s liner is glued, screwed and glassed into place while the hull is still in the mould, while the deck is then bolted and bonded to the hull for maximum strength. The Riviera Millennium hull was designed with propeller pockets to reduce draft and provide an improved shaft angle.

The Riviera Millennium saloon leads off the teak deck rear fishing cockpit through a sliding door, and features a leather and cherrywood lounge area with wet bar and entertainment system, separate galley with oven, hob and fridge/freezer, a dining room opposite, and steps leading down to the accommodation quarters.

The vessel has a day trip capacity of 18 guests. For overnight trips and longer stays at sea, Libertas offers two double-bedrooms with shower and bathroom ensuites and three single bunk beds. The vessel is equipped with a water desalination unit, outdoor BBQ unit, and a dive tank compressor.

A second helm station in the tuna tower above the enclosed bridge area allows the helmsman to steer from outside while spotting marlin and tuna on the trawl, or for manoeuvring the vessel when bigger game fish are hooked up and being reeled in.

Professionally crewed and maintained since new, Libertas can be sold with more than $100,000 of charter bookings already in the calendar for 2013/14 if wanted by the new owner, and the opportunity to separately buy a marina berth in the Viaduct which comes with two secure car parks. The boat is being sold by Mike Houlker of Bayleys Marine Brokers Ltd.

Mr Houlker said that in addition to its life as a serious big game charter vessel, Libertas had also been extensively used as a pleasure craft for corporate and private entertaining – including scores of fishing and diving trips around the Hauraki Gulf.

“Libertas has seen numerous hostings of domestic and international guests discussing New Zealand property transactions. Its sheer elegance is conducive as the perfect ‘boardroom’ for such negotiations to take place and reflects the mix of corporate professionalism with New Zealanders’ love of fishing,” he said.

Mr Houlker said there was also the alternative to buy a half-share in Libertas, as one potential purchaser had already indicated a willingness to become a part-owner.

“This is an incredible vessel for $1.15million, and reflects the price expectation of a very realistic vendor,” Mr Houlker said.