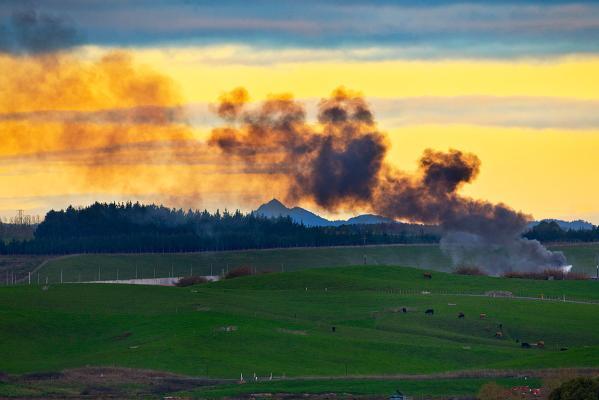 Riot at Prison: Some prisoners being moved from fire, 16 fire appliances at scene

Police are calling an incident at Spring Hill Prison serious this evening with injuries and more, one reporter from infonews.co.nz we have on stand-by from near the prison while reporters are working around the clock to find you the latest.

What we know so far:

- At 1pm police and ambulances were sent to the prison with reports of a stabbing, however the scene was too chaotic to enter.

- Since 1pm several fires have started with 3 news confirming footage of a prisoner lighting a block up in smokes.

- Police with dogs have just arrived at the Prison.

- Corrections are moving inmates not participating in the riot at Spring Hill to other parts of the prison, saying fires set by prisoners are endangering lives.

- The incident is confirmed to be "gang related".

BREAKING NEWS: Corrections are moving inmates not participating in the riot at Spring Hill to other parts of the prison, saying fires set by prisoners are endangering lives.

Plans for relocating the compliant prisoners within the two cell blocks affected by rioting to another part of the prison are being made, Corrections said.

Two vans of prison guards have arrived and sixteen fire appliances have been sent to combat the flames after prisoners lit fires and caused extensive damage to their cell blocks.

Police with dogs have arrived at Spring Hill prison in the Waikato as authorities appear to be mounting a bid to end the "gang-related'' riot at the institution.

Two dog squad cars have arrived as a fire lit by rioting inmates appears to be growing and the smoke lights up the darkened sky.

Fire appliances are still steadily arriving to combat the flames after prisoners lit fires and caused extensive damage to their cell blocks.

Corrections said 27 inmates at Spring Hill Corrections Facility near Meremere were involved in the incident, which remained "fluid" this evening.

Corrections told Fairfax negotiators had been called in to help resolve the situation.

Footage shot by 3News shows fires burning in the prison courtyards, with prisoners - some shirtless - seemingly celebrating the destruction caused.

The pictures show fires in two of the prison blocks, with another being lit as 3News were filming.

A Westpac rescue chopper from Hamilton is landing inside the prison.

Thicker blacker smoke is rising and more fire trucks laden with men are now heading into the prison.

Emergency services were called to the prison just before 1pm today, after reports of a stabbing and several other injuries.
Paramedics and police were initially unable to get into the jail due to the "chaotic" situation.

A reporter at the scene said an ambulance was seen leaving this afternoon, but injuries are yet to be confirmed.

Corrections Northern Region Commission Jeanette Burns said there was no danger to the public from the prisoners and the incident was contained in two cell blocks.

"Early indications suggest that the incident is gang-related," she said.

Burns said specialist teams trained to deal with such events were on site and one of Corrections most senior commissioners - herself - was co-ordinating the response there.

"This is a serious event and regrettable", Burns said. "The objective now is to successfully bring this situation to an end with minimal disruption and without injury to staff and prisoners.

"In these kinds of events I can't go into details about our plans about how we'll respond for security reasons, but I can assure the public that the situation appears to be contained at this stage."

St John Ambulance had three teams on stand-by at a "safe forward point" where they were waiting with police to go inside.

Fire and police were also on the scene. A large amount of smoke can been seen from the road.

The prison is cordoned off to the public while the riot continues.

Spring Hill is one of New Zealand's biggest prisons, with a muster of about 1000 medium and high security male prisoners.

It is on a 215 hectare site near Meremere in the Waikato.

LIVE Updates have begun below with reporters from at the scene to around the county finding out the latest with regards to this serious incident at the Prison.

6.50PM: Corrections are moving inmates not participating in the riot at Spring Hill to other parts of the prison, saying fires set by prisoners are endangering lives.

6.30PM: The main concern of police this evening was the massive fire that continues to blaze, and making sure that prisoners in that block remain safe.

6.20PM: Jeanette Burns, Commissioner Northern Region, said in a statement late this afternoon that around 27 prisoners were continuing to damage their cells within the prison.