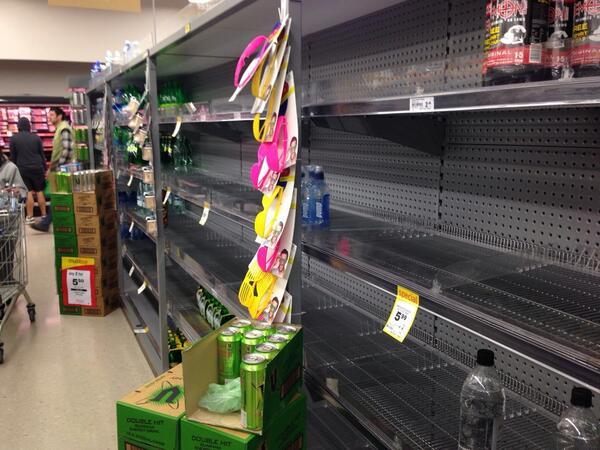 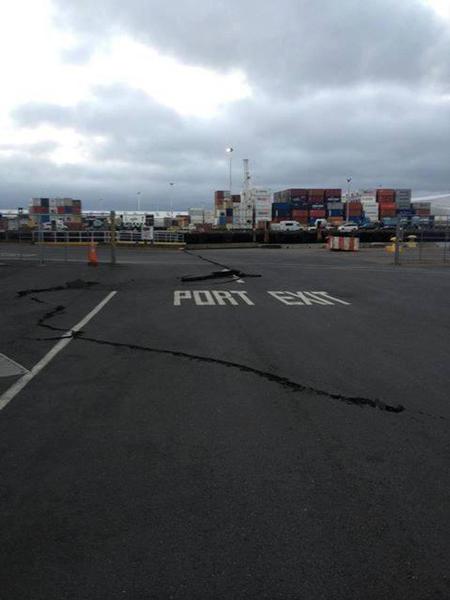 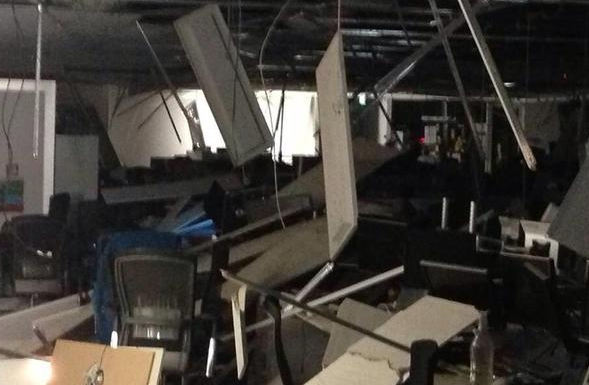 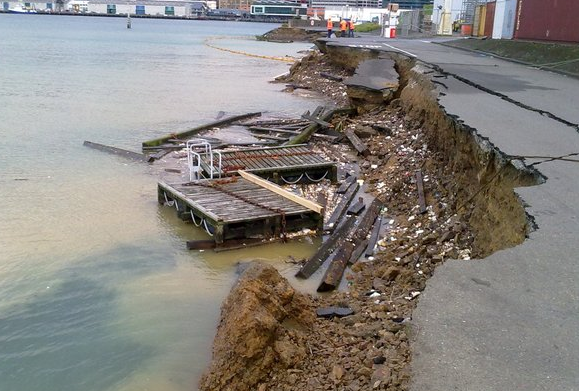 'Who ever decided reclaiming land was a good idea must be choking right about now' CREDIT: Facebook

Yesterday magnitude 6.5 earthquake struck 30km east of Seddon and 11km deep causing screams to be heard threw out the capital, four injuries so far and numerous reports of major damage and infustructure damage.

John Key the New Zealand Prime Minister has had a press confrence about the earthquakes, he has said it is a very traumatic time for all involved and that he will make sure the government is giving everything needed in this earthquake to support all involved.

The earthquake that made international headlines for its intensity has sparked worry all over the nation for central New Zealand.

Send us your images and video on infonews.co.nzs Facebook Page to be involved in our  community news.

UPDATED: "It has just gone midday Wellington is like a ghost town, nothing but contracters and buisness people" said our Wellington reporter.

Numerous Wellington CBD shops have opened back up today since the quake after surveying the damage, meanwhile other buisnesses are closed for the full day.

Although his word may not be heard because of the large ammount of shops still open in the CBD.

A dairy owner told infonews.co.nz yesterday "We have closed and will be closed tommorow, alot of items in our shop fell. The place needs a big clean up. We are going to be closed till we get someone in to check for infustructure damage after we heard our neighbour got damage"

Wellington Civil Defence, Emergency services and the Wellington Council have advised all residents to stay indoors threw out the day if possible and only leave when you really need to.

"We need everyone to stay indoors while we assess for damage" an emergency service spokesperson said.

However now that some of the assessing has been done, total damage has been seen around Wellington and that is why the mayor made it a no go zone.

PM: ITS A VERY TRAUMATIC TIME. LOOK AFTER YOUR NEIGHBOURS.

Prime Minister John Key says there has been minimal damage to infrastructure and assured quake-hit Wellingtonians the Government would do its "very best" to ensure they get the support they needed.

Mr Key was still to get an update on any fiscal impact of yesterday's earthquake but said, in principle, New Zealand could afford to pay for the damage caused by another earthquake "so its OK".

"There's nothing at the moment that's been advised to me that would indicate there's substantial fiscal risk to the Crown, we know that the Earthquake Commission fund really has nothing in it from the last time I looked at it.

"The Government just backs that up anyway, we have a strong balance sheet - we're in a much better shape than pretty much any OECD country in the event that we need to rely on the Crown," Mr Key said.

More than 100 aftershocks have rattled the area, including a 4.9 jolt just before 11am today.

GNS has also predicted there is a 30 per cent chance of an aftershock measuring up to 6 in magnitude in the coming week.

Wellingtons Wharf is submerging into the water, over 5m of land has fallen into the water below and numerous Wellington sighters have posted to Facebook and Twitter about the scene.

One told infonews.co.nz "It looks pretty bad. Who ever decided reclaiming land was a good idea must be choking right about now."

In our photo collection at the start of the article a photo shows the extent of the damage including cracks seen everywhere else.

Elderly people were left in the dark yesterday with no internet, phone line troubles and damage so it was hard to get help infonews.co.nz can reveal.

The small town of Seddon just 10 miniutes or so away from Blenhiem is home to the majorty of elderly people.

infonews.co.nz spoke with residents from the town who said it was hard to contact family members which made it very stressful.

"It was stressful. I couldnt get in contact with family. Dont have internet so thought the worst. Had to wait until the news came on to realise there was a big earthquake but everyone was OK" a resident said.

Seddon is currently dealing with what has been called a "massive clean up" since the earthquake.

However numerous aftershocks are keeping the whole region very nervous.

infonews.co.nz can confirm the majority of buisnesses in Wellington will be closed today and workers will need to call there managers to confirm if they are open or not.

Some buisnesses have opened in Wellington at midday then decided one hour later to close down including most dairies.

"No dairies open on Cuba, Willis or Quay streest" a resident said.

We can confirm the following buisnesses are closed today:

All LINZ staff at RNZ House (155 The Terrace)

Closed till midday or till further inspection:

POWER OUTAGES ALL AROUND

Wellington City Council spokesman Richard MacLean said he had received reports of power going off for a time in the suburb of Karori.

However in the CBD no power went out. "Electricity's on, people are still in restaurants and bars... it is not a chaotic situation by any means." he said.

Over 5000 customers were without power yesterday moments after the earthquake struck, 400 customers had there power restored late last night.

This caused issues for many residents trying to get in contact with family members.

One resident we spoke to without power said "I missed the news, lucky we have it back. Demand time I think"

NEW PLYMOUTH TO CHRISTCHURCH THEY SPEAK, WE LISTEN

infonews.co.nz begins our felt it coverage in New Plymouth where a quake feeler who was in Christchurch when all the 2011 quakes occured told us that his family ran for the hallway as computers and tvs feel behind them.

"It was chaos all round. Computer fell on ground, tv toppeled over aswell. We were all holding on for life. It was the most terrifying earthquake I have ever been threw"

Meanwhile a Wellington resident said "There was about sixty seconds of shaking, everything in the room was moving,'' he said. "I went outside and still all the power lines were shaking and it was just chaos, it was quite scary. It was the biggest earthquake I have ever felt.''

Ms Bennett and her husband Lee Slater, whose Highbury house is built on the side of a hill, said it was swaying on its piles.

"You usually only get a bit of a jiggle but this was a hula dance,'' Ms Bennett said.

A roof collapsed at the Harvey Norman building in Semple St, Porirua and a wall collapsed in Wainuiomata causing a gas leak in Bull Ave.

The shake was immediately followed by smaller quakes in around the Wellington/Cook Strait area.

Yesterday afternoon's large shake, which struck just after 5pm, followed dozens of aftershocks after yesterday morning's magnitude 5.8 in Cook Strait between Wellington and Seddon at 7.17am.

Most of the tremors have been centred in the strait but there have been quakes further south off Kaikoura and as far north as Wanganui.

The Pacific Tsunami Warning Centre (PTWC) said Civil Defence had made an initial assessment that the earthquake was unlikely to have caused a tsunami that would pose a threat to New Zealand.

However to Christchurch now where a resident we spoke to said hearing about the earthquakes in Wellington is emotionlly stressful.

"It is stressful, on our lives. What we went threw was something I would never want anything to happen like again, hearing something happen similar in Wellington makes me heartbroken."

"I feel for Wellington right now" she added.

LATEST: We have called 75 Wellington residents and Blehniem residents 72 of which told us they are not working today while the other three have said they start at midday.

"Nope, no work for me. BNZ completly damaged on 5th floor" - Wellington

"I am still nervous about another one little own work, closed for today" - Blenhiem

"The council has said to stay away till atleast midday, so I am working from 12pm" - Wellington

"It was scary but life goes on and I am working. The check at my work has came back negative to anything major" - Blenhiem

meanwhile another Wellington resident said "No work for me today, I am just helping with the clean up. The supermarket is a mess but is safe so far" - Wellington

EMERGENCY SERVICES PUSHED TO THE LIMITS, WHILE TRANSPORT EFFECTED

A Fire Service spokeswoman said nearly 50 calls were received to the central communications centre in the half hour after the earthquake.

All 12 Wellington appliances were sent out on jobs, with a backlog starting to pile up by 5.45pm.

She said there were multiple alarm activations in central Wellington with widespread reports of structural damage.

So far four injuries have been reported, one injury by a falling TV that landing on someone causing minor injuries.

Emergency services were gathering at the regional emergency management office in Thorndon.

"We're getting reports of damage coming in," Mr MacLean said.

"We're obviously working with the fire service and the police. They're the ones who are going to be giving us a lot of the information.

"We're getting lots of reports of stuff coming off shelves, structural damage of buildings."

Domestic and international flights have been affected but the number is not yet known.

Some flights have resumed at Wellington Airport, Ms Kirk said.

All suburban trains on Wellington's rail network have been cancelled until further notice.

In a statement on Tranz Metro's website, the company said bus services were being arranged, but would be limited.

"Customers are advised to make alternative travel arrangements and only travel if necessary.

"Tranz Metro apologises for the inconvenience and we thank you for your patience."

An earlier quake had forced the temporary closure of the network this morning with some services resuming.

However we infonews.co.nz can now confirm that TranzMetro will not be operating in Wellington today and no bus services will replace the trains either.

This makes it hard for those of which who travel on train to get into Wellington for work.