Cailen Calkin (Hamilton, NZ) on top of the podium in the 12 years boys. CREDIT: Jerry Landrum 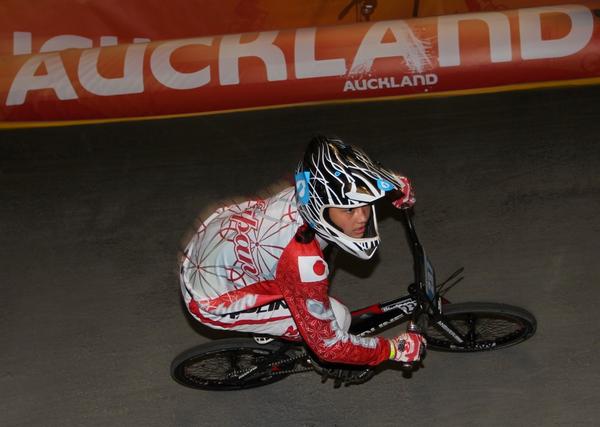 Trans-Tasman rivalry was resumed at the first session of the UCI BMX World Championships when New Zealand and Australia both won three titles today (Wednesday).

Ten titles were on the line with Maia Coleman-Savage drawing first blood for the host nation at the Vector Arena in the 10 year girls. Ironically Maia lives in Australia but still has New Zealand citizenship.

Coleman - Savage went through the meet unbeaten, winning her three qualifying motos and then a semi-final, before using more speed off the last corner to come from behind and overtake French girl and defending champion Francesca Cingolani.

Like a lot of young BMXers Australian Jesse Asmus who took out the 10 year boys wants to ride at the Olympics.

Other Australian included Des’Ree Barnes in the 11 girls who made it a trifecta after also being successful at the 2009 and 2012 World Championships.

England claimed its only title of the session through Ryan Martin, who beat defending champion Julian Dittrick of the USA. “When I crossed the finish line I thought I was going to ball into tears,” said Martin who lives in the Waikato, but still has a British passport.

Gisborne’s Jessie Smith broke her duck today having finished twice at the Adelaide and South African Worlds in 2009 and 2010. “I’m stoked to win this time. Going down that start ramp gives you such an adrenalin rush

New Zealand also took out the 12 boy’s title with Cailen Calkin from Hamilton saying the five to six days training since Easter’s national championships having paid off. Now he is looking for more success in tomorrow’s Cruiser Championship for the larger 24 inch diameter wheeled bikes.

“Mind shocked” was how Australian Shelby Green described her victory in the 13 year girls. “I couldn’t believe it. I was hoping to get top 3, everybody looked really fast.” Green beat four finalist from last year’s World’s at Birmingham including defending champion Maite Naves Barreto of Brazil who was second and American Anna Johnson of the USA who was fourth.

Carlos Javier Zuluaga Melo will go home from Auckland a lot happier than after last year’s Worlds where he was last in the final. The Columbian beat fellow South American Facundo Lorenzo Rios in the 13 year boys.

Japan scored the double in the 14 girls, with Saya Sakakibara beating defending champion Sae Hatakeyama. “I crashed out in the semis last year,” said Saya in a perfect Aussie accent, the result of living across the Tasman, but retaining her Japanese citizenship.

Defending champion Michael Gonzales won the 14 boys title with local hope Maynard Peel drawing the least favoured outside start lane and finishing third after being unbeaten in his three motos and the eighth, quarter and semi-finals.