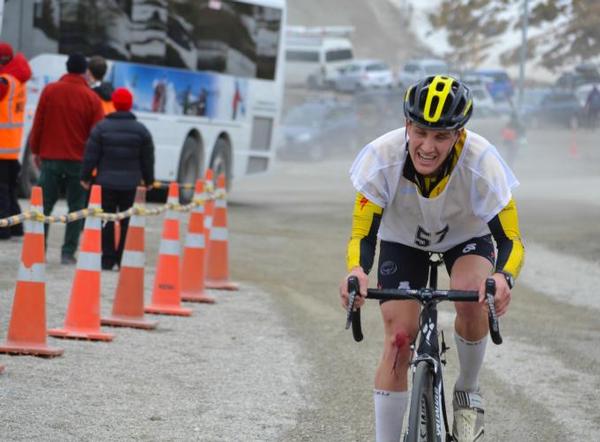 Multisport Superstars line up for Peak to Peak

The battle at the front was between Braden Currie, (Wanaka) Coast to Coast Champion, Dougal Allan (Wanaka and 3 times winner) and Adam Milne (Christchurch and 2 times winner), but it was Currie who prevailed to cross the line first.

The race attracted a filed of almost 400 competitors with 63 individuals and 70 teams entered. The 44km race started at the top of the Remarkables with a 2km ski/snowboard on the Homeward Bound ski run, followed by a 17km mountain bike ride down the slightly corrugated Remarkables access road. From Frankton Beach racers paddled 7km to Queenstown Bay on a calm lake, run to the next transition at the bottom of the Coronet Peak Road and finally grunted up the last leg of the race, the uphill bike to the Coronet Peak base building.

Currie made his move early with a quick run down to the skis and boards lined up on the ski field at the top of the Shadow Basin. Using clickin bindings on his snowboard he was able to get away with the leaders on the ski and using a slightly longer board enabled him to handle the firm conditions on Homeward Bound.

Currie was eleventh through the transition, over 3 mins ahead of his closest rival Allan. Meanwhile Milne, who is not a confidant skier was struggling through this section sliding on and off the toboggan he chose to get down the run as quick as possible.

By Frankton Beach,the gap was reduced to one and a half minutes although Currie was leading the entire field by now, and he managed to maintain his position as Allan and him powered up the flat lake into Queenstown Bay.

The field at this point was strung out the full length of the Frankton arm as the armanda of kayaks made their way towards the next transition at Queenstown Beach.

In the women's field, there was no clear favorite with both the previous winners over the last 4 years Maier and Williams not on the start line.

Genevieve Matthews (Rotorua) lead the field into the Queenstown with a solid ski and downhill bike. The paddle saw her closest competitor Miriam Wood (Christchurch) close up to just a minute and 10 secs behind but from there Matthews moved away to claim the win in a time
of 3.02.01

The Risky Biscuits team paddler took over one minute from Currie on the paddle leg of the race  and lead out of the water but this was going to be the last time that the teams showed at the front, and the leading individuals class was beginning to show.

Currie pushed really hard on the run and Allan was unable to match the pace going up Gorge Road.  The short gap between the athletes that had been consistent on the lake opened up to decisive 3 minutes and 08 secs gap by the finish line at the Coronet Base station for Currie to claim the crown of the Peak to Peak champion for the first time.

“Today I had a near perfect race on all stages, although I knew if I faltered Dougal was right on my tail.  I did have a few nervous glances over my shoulder during the climb, but all and all it was a good race for me “ Currie said on the finish podium.

In the open teams division, the leading team out of the water ProActive Physio 1 (Queenstown), continued their strong showing with Paul White having a good run to put them third at the transition to the bike leg.

Warren Bates, an adventure racing world champion and team member of ProActive Physio 1, and the uphill biker found the ‘short’ climb up Coronet  Peak difficult  “It was not much to my liking, as I am much better at long slow distance, so I found this climb particularly hard”. says Bates.

But all in all, the ProActive Physio 1 team had a good day and won comfortably from team  Concrete Peak and the Regretables in a time of  two hours 12 minutes and 14 secs.

The NZSki area challenge set up a couple years to encourage inter-ski area competition was won again by the Remarkables team, while the Vets team trophy ‘the Golden Boot’ went to Avanti Plus Dunedin. They have won this division every time they have entered and now have a real stranglehold on that trophy.

A slightly smaller school teams field entered but their high finishes in boys and girls teams showed that the future of multi sport is in good hands. The winners this year were  the Otago boys High School team in a time of 2hours 15 minutes and 22secs.  This would have placed them third overall in the teams division.

In the Veterans division the ‘older’ super stars of multi sport in New Zealand showed they can still match it with the younger athletes with Nathan Favaae finishing 4th overall and 1st Veteran, with new Quenstown resident Steve Gurney finishing 2nd in the Veteran division.