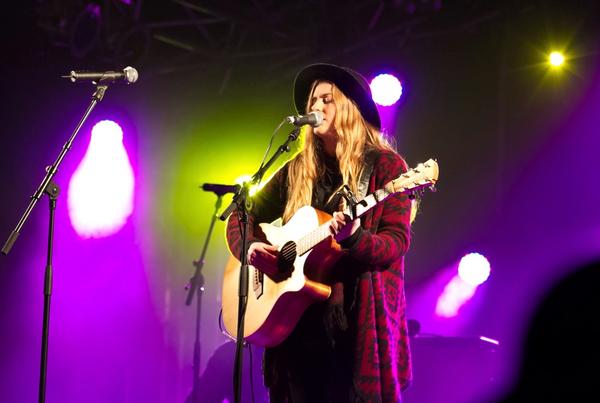 Organisers of the NZ Open last night (Wednesday 27 November) announced iconic Kiwi songstress Anika Moa will headline the inaugural Open Sounds – an open air concert to be held on the Saturday night of the tournament.

Open Sounds will be held at The Hills as part of the 2014 NZ Open Championship in Queenstown from Thursday February 27 to Sunday March 2 2014 and will also feature up-and-coming local artist Holly Arrowsmith.

The family-friendly Open Sounds concert, presented by award winning Queenstown wine brand Amisfield, will take place at 6pm after play finishes on the penultimate night of the event, Saturday 1 March and will ultimately become an annual fixture of the tournament.

Located at popular food, wine and entertainment zone The 19th, the outdoor event offers a social, friendly and relaxed opportunity for people to gather in "a stunning and spectacular environment" to enjoy the best of Kiwi music, food and wine.

NZ Open tournament director Michael Glading said the launch of Open Sounds, presented by Amisfield was "an important and exciting" element of the tournament.

"We're thrilled to announce Open Sounds and welcome Amisfield on board as the official wine sponsor," he said.

"Amisfield is renowned for its superb quality wine and is a brand we're thrilled to partner with.

“We promised to build this event annually and increase the entertainment, social, food and wine factor."

"We think we've done that yet again and we’re privileged to have Anika Moa, such an amazingly successful Kiwi artist, as next year's headline act for Open Sounds.”

After leaving her US label Atlantic Records aged 19, due to her insistence on playing her New Zealand brand of acoustic folk-pop songs, Anika Moa was named one of the ‘Top 10 Kiwi music successes of the past 10 years’ by the New Zealand Herald in 2009.

She has released four critically acclaimed records since then, picking up many accolades for song writing, album sales and best Female Solo Artist on three different occasions at NZ Music Awards ceremonies.

Alongside her solo career, Anika has collaborated with many artists including SJD, Bic Runga, Dimmer, Julia Deans and ‘Anika, Boh and Holly’.

This year, Anika has been working on new projects including the release this week of her Baby’s album ‘Songs For Bubbas’.  Her fifth studio album is also scheduled for release in the first half of 2014.
“Songs For Bubbas” has brought me back to life in a sense," said Anika.

In a departure from her normal style the album sees Anika singing in English and Teo Reo Maori over a series of beautifully simplistic instrumentals composed of guitar, Fender Rhodes piano, finger clicks, handclaps and even animal noises.

Anika said she was “so looking forward” to coming back to Central to play at the NZ Open. Joking about whether she’d been invited to play music or golf, she said she was “stoked” to be asked.

“Maybe Sir Bob would like to caddy for me?” she said.

“OK if I’m there to play music, not golf, I’m bringing my band and I’ll be looking as clever and beautiful as ever. So see you at The 19th on March 1 for a bit of fun”.

One of New Zealand's greatest rising stars and local Queenstowner, Holly Arrowsmith, has also been confirmed as the opening act at Open Sounds.

At just 16, she was a finalist in the New Zealand Country Music awards with her song 'Heavenly Lights', and went on to win many local titles including 'Best acoustic artist' two years in a row, 'The Best original song' And Queenstowns 'Ultimate Muso' at the Battle of the Muso's.

More recently, Arrowsmith was named the winner of 2012 'Songstars' competition, with her powerful single 'Wolves and Moons' and in June 2013, she released her first EP 'The River' to great response, and is embarking on her first tour of New Zealand playing at numerous festivals.

Mr Glading said this year's concert had been "very well attended" by young and old, families and groups, and was the perfect end to a day of golf at The Hills.

Organisers are expecting over 20,000 people to attend the four day event and urge people to "get in quick for tickets" to avoid disappointment.

Operating for all four days of the tournament, The 19th at The Hills is fast becoming a ‘must-attend’ destination on the local summer calendar in its own right.

Limited corporate hospitality tickets to the Wolves Bar are available for Saturday March 1 and Sunday March 2 and also include daily entry to the golf and VIP car parking. The Wolves Bar will open daily from 10.30am to 6pm and the daily ticket price is $249 all inclusive.

All tickets to the NZ Open are on sale now via Ticketek at www.ticketek.co.nz.