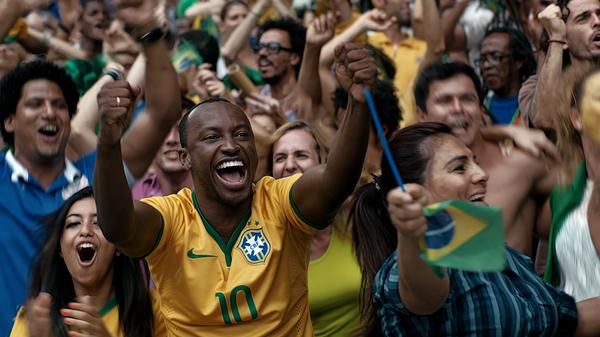 Nike celebrates the Brasilian style of play with the launch of 'Dare to be Brasilian' short film CREDIT: RAW

NEW CAMPAIGN CHALLENGES THE WORLD TO 'DARE TO BE BRASILIAN'

In a country known for turning football into an art form, Nike celebrates the Brasilian style of play with the launch of ‘Dare to be Brasilian’. The heart of the campaign is a short film featuring Neymar, Thiago Silva, David Luiz, Paulinho, Bernard, and members of the coaching staff, including Luiz Felipe Scolari (Felipão), which highlights the players' unique styles and attitudes on the pitch.

“As their victory on home soil last summer reminded the World, no one plays like Brasil,” said Davide Grasso, Chief Marketing Officer, Nike. “Their unique brand of phenomenal football is an inspiration to Nike and athletes around the world, and we are celebrating that unique style of play with this new campaign.”

“Dare to Be Brasilian” looks at the individual personalities and styles of Neymar, Silva, Luiz, Paulinho, and Bernard, as well as the essence of their style of play, to create a visually stunning portrayal of the game through each player's perspective. In scenes unique to each player, we see the game through their eyes. Neymar plays like a kid; Luiz runs over the competition; Silva dominates the penalty box; Bernard is the fleet-footed midfielder in a land of giants; and Paulinho is the responsible one of the group.

“The football player in Brasil is a player who improvises, dares and modifies," said Felipão. “Our players infuse their unique style of play with their natural talents, and that’s when these players and the Brasilian team become unbeatable.”

The film opens with the players preparing for the kick-off singing the Brasil national anthem. As the game begins, the film flips from the pitch to Thiago’s world, shot in a gangster-noir film style. He is The Godfather of the penalty box, and, as Ivete Sangalo watches on, Silva attacks an opponent, stealing the ball.

The scene cuts to Felipão, who is commanding a team of four-year olds wearing the National Team uniform. Felipao’s fatherly style of management clearly apparent in this heart-warming moment. One is a young David Luiz, and the defensive back’s world takes on an animated forms courtesy of Brasilian cartoonist Rafael Grampá.

The script follows this cadence between fiction and reality until it closes on a goal by Neymar, closing with the statement, “No one plays like us.”

View the video here: ">Nike Football: Dare to be Brasilian

The Brasilian National Team kit will be available December 6, 2013 at Nike Only Stores and Rebel Sports RRP$110