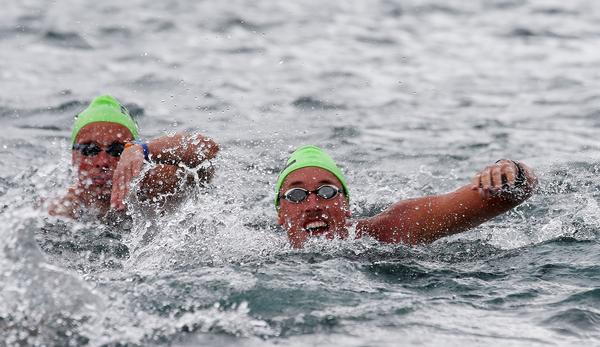 Radford, who comfortably won the 10km yesterday, had a tight battle in today’s 5km race before out-touching the Japanese open water champion Yasunari Hirai for the victory.

The Japan swimmer made the first lunge at the finish board but missed, allowing Radford to make the winning touch and the title.

The pair both train together in the crack open water squad at Uniswim in Western Australia.

Another of the Uniswim group, young Australian Sacha Downing also earned the double after winning the women’s 5km event. Downing swam away from the pack to comfortably win ahead of fellow Australian Leah Cutting and State AquaBlack Emma Robinson (Capital).

Radford was ecstatic that the 5km race went exactly to plan.

“It played out exactly how I wanted it to,” Radford said. “I sat at the back of the pack for the first lap and then Yasu took off on that second lap. I manoeuvred my way through the pack to get on to his feet. And then I just really waited until the last 300m where me and Yasu had a really tight finish and I just happened to come out and time my finish correctly,” said Radford.

His double win has given him confidence moving forward this year.

“To be able to back up day after day it shows that I’m quite fit at the moment and that I’m in good stead for the rest of the year.”

His newly adopted Western Australian training plan appears to be paying off.

“We have a lot of open water swimmers in the squad so we are definitely specialising in the open water. We work on things that pool swimmers don’t work on as much. We do quite a bit of pack swimming in the pool and get used to that,” he said.

The New Zealand Championship silver medal went to Michael Mincham in a time of 58:34.38 in a close finish with bronze medal winner Phillip Ryan.

The minor placings in the Oceania Championship were awarded to Australian Ridge Grimsey in second and Phillip Ryan in third.

In the women’s field, it was Australian young gun Downing who made it two from two with a decisive victory, comfortably winning by 10 seconds. With Downing ineligible to win the Oceania Championship, the title was taken by Cutting who finished four seconds ahead of Charlotte Webby.

The New Zealand Championship race was won by 19 year old national representative Emma Robinson in a time of 1:04:44. Yesterday’s 10km winner Grace Somerville stepped up for the silver and Webby claimed the bronze.