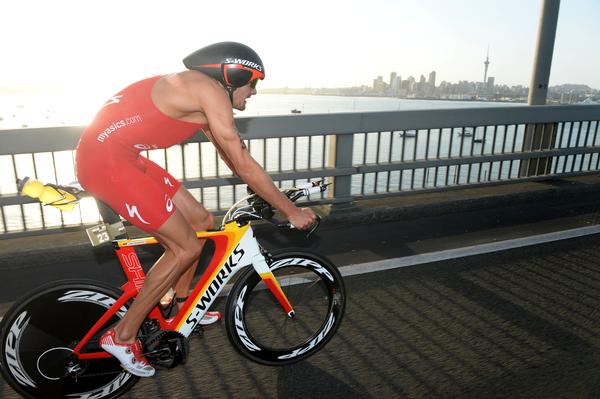 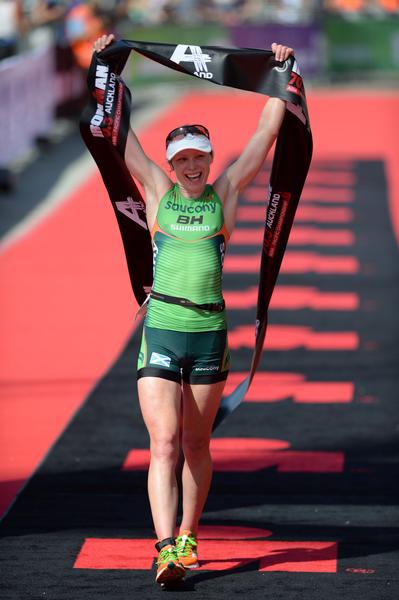 A blistering run by Jan Frodeno propelled the 2008 Olympic champion to his maiden victory over the endurance distance as the tall German destroyed a world-class field to clinch the IRONMAN 70.3 Auckland Asia-Pacific Championship title.

Frodeno, 32, competing for just time over the IRONMAN 70.3 distance, came out of second transition in third alongside Kiwi Terenzo Bozzone a little over two minutes down on the long-time leader Andrew Yoder of the USA.

Yet within just 800m of the 21.1km run the Australian-based Frodeno powered clear of Bozzone and quickly caught and passed Yoder. By the 5km point the 2012 London Olympic sixth place finisher had already opened up a 43-second lead on the field and by the time he reached halfway point of the 21.1km run his advantage was more than 1:30 and the race effectively over.

In the final 100m he milked the applause of the fans in a sun-drenched Auckland Viaduct Harbour and added of his victory: “It's fantastic. My first win in a 70.3 is just the sweetest feeling. This is the greatest job in the world, but it is even greater when you are winning.

“Today I felt really good on the bike and that has never happened before in a 70.3 race. The swim was very controlled, but because I felt good on the bike I knew I would have a little bit of energy (for the run) which previously hasn’t happened.”

Frodeno, who is married to Australia's 2008 women's Olympic champion Emma Snowsill, crossed the line in 3:45:39 and believes victory in Auckland will act as perfect preparation for his main goal for the season, the IRONMAN World Championships in Kona, Hawaii.

In a tight battle for second, evergreen Australian Richie Cunningham produced an eye-catching run to surge past Kiwi duo of Bozzone and Bevan Docherty in the final stages of the race.

Cunningham, 40, who came out of second transition in eighth some 23 down on Bozzone and Frodeno, finished with a wet sail to record a total time of 3:47:21 for secure second on the podium.

Auckland-based Bozzone came home 11 seconds further adrift, but was delighted to make the podium in front of his home fans.

“I'm really happy with my run,” he added. “It is probably my first race in Auckland for eight years and it was nice to be able to perform in front of a home crowd. I gave it my best shot and tried to keep up with Frodo (Jan Frodeno) at the beginning of the run but he went past me like I was standing still.

“The crowd support was great. I was trying to keep track of how many cheers Bevan and I got, but I lost count before I made it out of transition (the pair were close together out of second transition).”

The 37-year-old Scot and three-time former duathlon champion trailed the Australian Luxford by more than two-and-a-half minutes after the bike. However, by the midpoint of the run that gap was down to 53 seconds and by the 15km mark Morrison had caught and passed Luxford, the 2013 champion.

Morrison crossed the line in 4:14:41 – some 46 clear of Luxford, a former ITU World Under-23 champion.“It’s all so exciting when it all comes together in the end,” Morrison said. “You can’t really believe it is going to happen until you take the lead and you tell yourself to keep going.

“I had faith in my own run but what you don’t know what your opposition has in store. A lot of people when you pass them they dig in and hang on.”

Luxford, who took a three-week training break in December during which time she was maid of honour for reigning IRONMAN World Champion Mirinda Carfrae, was philosophical in defeat.

“It was probably not the race I had last year but I came into this race in a lot different condition. Catriona's a great athlete. I'm happy to come away with second.”

Jo Lawn, who celebrated her 40th birthday last month, ensured a Kiwi presence on the podium in the women's elite race by taking third in 4:24:22.

Auckland-based Lawn, who lives on the course, is undecided about whether this event will be her final race before retirement and fighting back the tears said: “I love the triathlon people so much it is hard to know when to stop. I know though at some point I have to move on and start the next phase of my life. I'm proud of this event because I want all my friends around the country to visit what I believe to be the best country in the world.”