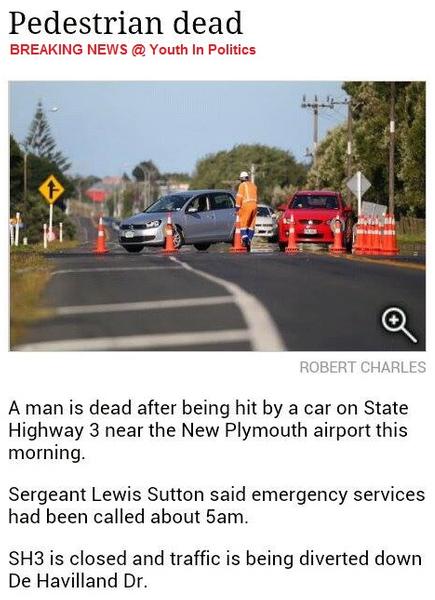 Pedestrian dead: "was it a hit and run?" - NPYIP

BREAKING NEWS: A 19-year-old Bell Block man is dead after being hit by a car on State Highway 3 this morning.

Police released no further details to the public.

SH3 is closed and traffic is being diverted down De Havilland Dr.

Youth In Politics's Michael Riley went to the scene to see how the diversion was going on.

Police didn't awnser any questions however they did say an investigation is underway.

When asked "was it a hit and run?" there was no reply from the police officer diverting traffic.

The man was believed to be heading from Waitara to Bell Block when he was hit near Big Jim's Garden Centre.

The serious crash unit is investigating.

We'll have more as we get it.